We have all grown up in the age of computer games, and I'm sure that you all have some idea about the mechanics and the origins of the adventure... 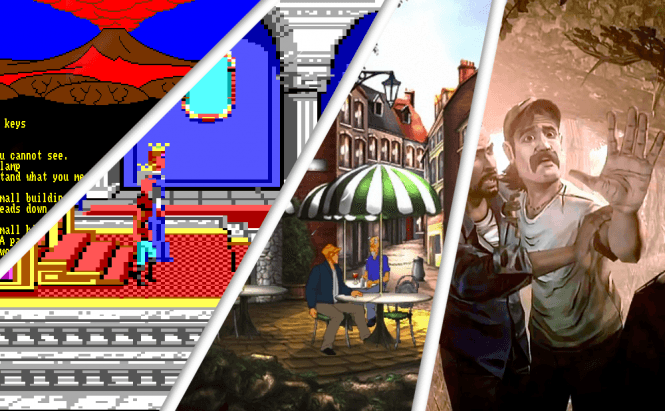 We have all grown up in the age of computer games, and I'm sure that you all have some idea about the mechanics and the origins of the adventure genre. However, since I'm about to discuss the general direction the genre is taking, a couple of words are in order.

The adventure genre can itself be divided into several subgenres: quests, escape-the-room games, hidden-object games, and action adventure games. What they all have in common is the big focus on exploration and interaction with the environment.

This genre originated over thirty years ago in the form of text adventures (which could be viewed as a sort of interactive fiction). The player had to read a lot of dialogs and long descriptions, and then type in their commands hoping that the game's text parser would understand them. Later on, first graphic quests came out, which mixed graphics with the same text-based interface. After that, the point-and-click style of control was introduced, and adventure games became entirely graphics-based. Over years they became more elaborate in terms or graphics and overall presentation, but they still largely remained true to their basic principles.

This is where the Telltale company comes in. It has brought some genuinely new ideas into the genre, and introduced a new form of game presentation. Their most notable contribution was that they made the games considerably shorter: they usually divide them into several chapters - or episodes â€“ and make those available separately, one after another over the course of several months. This is quite unlike the regular formula, where you have the whole game in front of you once you buy it and you know that you're in for several hours of item hunting and exploration.

This could be viewed as a logical step in the evolution of the adventure genre, which spans over four decades of innovation and rehashing of worn-out mechanics. Let's have a look at several representatives of the genre and try to figure out where the genre is heading. This game can be considered the first true representative of the genre, created in 1975. Surprisingly, it is still available for Windows users. It is much like reading an interactive book, one which changes its story based on your actions. However, unlike those â€œchoose your adventureâ€ books, you don't usually have a predefined choice of options; you have to figure out what you can do on your own. It is a very interesting experience, and it makes your imagination work. You picture the world the way you see it, so each player has their own idea of the reality they're dealing with. I strongly recommend trying it out, if just as an insight into the very origins of the genre. The good news is that you can do that without installing any additional software. The King's Quest I Screenshot

This game represents the next iteration of the genre: there's an animated colorful world and you move your character around it just like you would in other genres, but there's also a text parser at the bottom, where you input your commands - like â€œpick up coinâ€ or â€œtalk to kingâ€. The game even plays sounds to accentuate the most dramatic moments, like encountering a dragon. The graphics and sounds were very simple, but they definitely gave new depth to the immersion offered by the game. Broken Sword is a good example of what was happening in the genre in the mid-90s. The basic premise is still there: you still have to solve puzzles by using various objects and interacting with the world, but everything is fully animated, and the characters speak aloud. There are no text commands to input, everything is done through the point-and-click interface. You just point your mouse to something that you want to interact with, and you click. You can interact with dialog options (by choosing your replies from several choices), various items, different characters, etc. The puzzles themselves are more varied, some of them being timed or requiring a limited number of actions. Now we've got The Walking Dead, created by Telltale Games Company, one of the new-wave representatives of the genre. Like most Telltale games, it is based on an established piece artwork, in this case the comics by Robert Kirkman and the corresponding TV series. However, this game is quite unlike most Telltale games as it's not just a bland cash-in on an existing franchise, but is actually a new step in the evolution of the adventure genre. First of all, it includes some roleplaying into the mix, and then it throws in some quick-time-event scenes. It's not as awful as it sounds, believe me. The result is surprisingly organic: each action affects the further development of the story, and everything happens almost in real time, without waiting for you to take an action on your own. This experience is even brought into the dialog system, which imposes a time limit on your answers. It's not like you're reading a book at your own pace anymore, it's truly a fresh look at the genre and will likely serve as a new milestone for adventure games years onward.

As we can see, the genre is far from being dead or stale (which it seemed to be just a decade ago), even though it might seem impossible to add anything new to the formula. Whether it's a new renaissance or a fluke, we can just sit back and enjoy the new turn.

What kind of adventure games do you prefer?
View results

Previous story iOS 7: Must. Copy. Windows. Next story Choose the Best Fitness App to Keep Track of Your Workouts

I'm for the last two variants