Bows and Arrows in Games

Never played a rogue or ranger in computer games? Never shot a bow in your life? Try it! 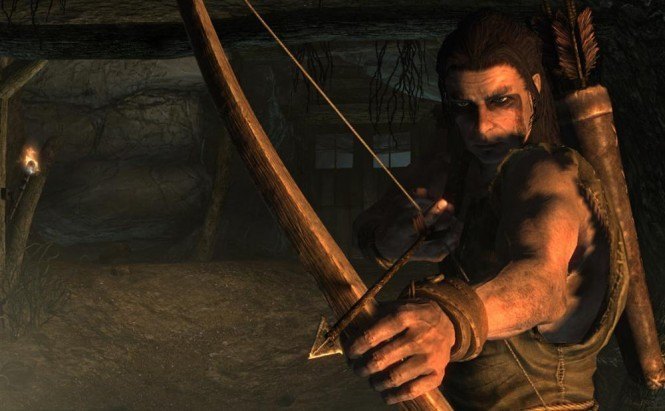 Bows and Arrows in Games

It seems that archery is all the rage nowadays; with no small amount of thanks to Hunger Games, apparently. A lot of games in the RPG genre, especially those based on a medieval or fantasy setting, involve shooting various kinds of arrows using different bows. The looks of those bows are very different even within the same game, and as a rule the more powerful the bow, the more beautifully decorated it is.

I've chosen three games to demonstrate how archery is represented in the world of interactive entertainment: Gothic, Skyrim, and Dragon Age. They're all old-school single-player games, with no multiplayer whatsoever, so they're all heavily focused on making bows feel at least decently realistic, without sacrificing realism in favor of pacing. Let's have a look and see how much bow mastery is required to shoot a bow in each of them. In the case of Dragon Age, you feel that the game doesn't demand too much effort on your part to shoot bows, and that's quite true. The whole process is indeed quite simplified. The mechanics are as follows: you take your enemy into focus until you kill it; your character will continue attacking automatically unless you order them to do something else or stop. This makes it almost too simple to play as an archer, especially if you know how to stay away from damage. As an archer, you won't last long in close combat, what with you being quite feeble and unable to wear heavy armor.

Talent trees for archery specialization are not that long to master, giving bonuses to your character's shooting skill and damage. Just having a bow in this game makes your life so much easier: for instance, you can spot your foes long before they become aware of your presence. The only downside is that the game is played from the thirst-person view; which, combined with the fact that you can't aim your shots yourself, makes for a detached experience. Still, this may not be all that bad if you like to keep things simple. A bow is a mighty weapon in this game, allowing you to keep your enemies at a distance. There's a special kind of monsters, Lurkers, who are pretty hard to deal with in close combat; and you can kill them in two shots if you do everything right. If you don't like magic, which you can also use to kill stuff from a few yards away, archery is your choice.

This old game uses a combination of bow control from Dragon Age and Skyrim. On the one hand, you do have to aim your shots, but on the other hand it doesn't matter which part of your enemy's body you damage: a direct hit in the head and a gentle knee scratch are both pretty much the same. The only risk is that you'll miss completely if you don't take into account that your arrows fly a bit higher than expected. Still, it's a welcome change that your involvement is actually noticeable, compared to Dragon Age.

One more point here: you still can't switch to the first-person view in this game, which somewhat breaks the immersion. But the fact that you're actually pulling the bow string and letting your arrows loose â€“ it more than makes up for all that. Skyrim is among those games that give you this unmistakable feeling of actually being an archer. Here you have to do everything yourself: you aim your shot, you pull the string, and let your arrow loose when it's time, and your arrows make a nice arc in the air, and the mechanics of shooting a bow are carefully emulated.

Bows are actually among the most useful weapons in the game: they are effective at a pretty decent range deal a lot of damage. Arrows even do some bonus damage depending on which bow you use, which part of the enemy's body you hit, what skills you've learned, and so on. What's even more fun, you can usually find the better bows lying around inside caves and chests, and you don't have to buy them.

And the most important of all, you can shoot your bow from the first-person view, which makes the game almost as engrossing as shooting a real bow.

To sum up, if you have even played an RPG game, you may have noticed that sometimes even fighters and mages pull out a bow and shoot stuff in certain situations. Well, now you know why: for some strange reason, in most cases bows simply do more damage. The catch is that shooting a bow requires a great deal of skill; so if you're looking for the long-range advantages of a ranged weapon, you need to start practicing right now.

Referenced Windows applications
Which game had the best bow mechanics?

Skyrim (with mods no game can be better than Skyrim).

You forgot the 'Thief' series.

I kind of dig the bow play in Thief.