Do you like playing in person? Here are the tools to ease the process of roleplaying, or to cope with distance difficulties. 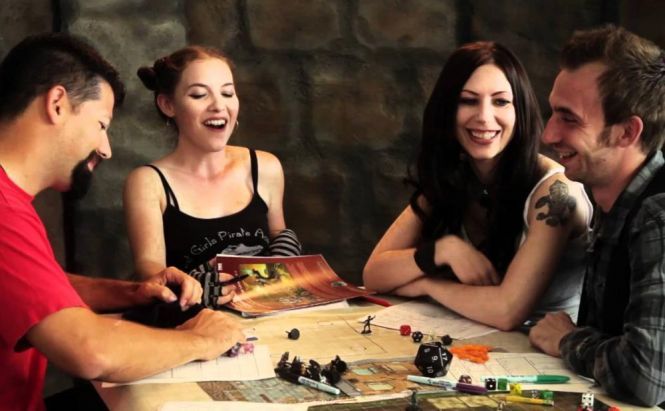 The latest decades became associated with computers, and virtual game worlds. Games help us relax but their variety is not bound to the digital sphere, there are many table-top games with cards or other hand-out materials, like Carcassonne or Dungeon and Dragons (also known as DnD, D&D). The latter, in general, requires only players, some paper pieces, several pencils and a set of dice.

What Is It All About?

The DnD system gave birth to numerous fantasy worlds. The mechanics of the system and the worlds were adopted by computer game designers who brought to live many successful projects. Buldur's Gate, Icewind Dale, Neverwinter Nights, Dungeons and Dragons Online are only a small part of the existing list. Turning back to the face-to-face play. Everybody sits at the table with the rulebooks at hand and a cup of tea on the table, and the game starts. Usually, the Master (better known as the Dungeon Master or the DM) is chosen and all players create their characters (this may take a lot of time at first) beforehand.

You may wonder who is the Master, well, this person runs the game. He (or she) is the storyteller for the evening, the creator of the world, and the maker of vital decisions upon the characters' action results and dice rolls, as well as the referee for outcomes of encounters.

The essence of the game can be described as fun adventures in a good company. People sit around one table and take on a role, they may never try in real life. For example, you can easily take the challenge of playing an evil wizard surviving in a party of three good characters. The DnD system is undergoing a new circle of rule changes with the 5th edition now. This year the D&D has celebrated its 40th anniversary.

Some adventures may last for a couple of hours whereas other continue for months. The latter may face a sticking point when one of the players leaves for another city. Thanks to the age we live in, there are ways to continue sessions even in such cases.

If You Have No Dice

Let's assume that you've faced the situation when none of the players, including the DM, has dice but you have a PC available. You can try to play using digital dice rollers. Gamer Dice does not have the most impressive design among these tools. Nevertheless, you may be surprised with functionality. It allows for dice grouping, color changing, and custom dice set saving for repeated usage. Its biggest disadvantage is in the advertisements that accompany the free version.

Dice Shaker has a very plain interface, being very modest in design. An interesting fact is that it is not only a dice roller. You can also create character profiles and assign a dice to each entered action or ability. If you are a fan of simple looking tools, this might be the choice.

Dicey Stuff Dice Roller provides a good selection of dice. You can even make 3 or 5 sided die throws, the ones not existing in reality. It supports custom dice combination rolls, which might be very handy. This tool utterly deserves your attention.

Each of the mentioned programs has a snapped mode to be run in, taking as little space as possible. These three utilities are free to use, but may include ads within, be careful not to click on those.

Over the Hills and Far Away

Another instance full of inconveniences, which is quite normal to happen, is when distance interferes into sessions and players can't meet for a game. This had been a serious problem before, but today, if you have the desire and some spare dollars to spend on additional software, it can be easily overcome.

The easiest way to connect people for a session is Skype. But it might be not very convenient in several aspects.

First of all, if everybody trusts each other, there is not much trouble in not seeing dice roll results, otherwise, it might be a point at issue. Of course, video chatting may solve this problem to some extent, but not completely.

Secondly, using Skype, the DM should utterly trust the players, as he (or she) doesn't see the character sheets. Well, this might be also solved with Drive-created documents but in this case, all characters will be accessible to anyone sharing the document, which is not desirable. There is a lot more fun when players are not aware of other characters' peculiarities.

So, Skype is a good way out if one person of the group is far from the party, but it will hardly work for a large group of people, without any compatible visualization tools. Fantasy Grounds is good for sessions to carry out over long distances. This is a virtual tabletop that allows the master and the players to enjoy their game to the full. This program provides digital dice with adjustable colors, various story and character creation tools, convenient battle visualization possibilities, and DnD rule references for campaigns. The only thing it lacks is a voice chat, though the in-game chat understands slash (/) commands that can be used to send private messages, announce actions, and write in languages not all characters may understand. All this contributes to the atmosphere of an adventure.

The noticeable disadvantage of Fantasy Grounds is that at least the master must buy the full license. The single-payment sum is quite considerable, but The DM Ultimate version (which costs $149 on the official site) allows any number of players to connect for free with a demo edition. In spite of that, it offers wide possibilities for the dungeon master to create quests with available hyperlinks. EpicTable is a decent competitor to Fantasy Grounds. It also has good functionality, while costs less (about $59.95). I didn't try it out myself, but from the information provided in video tutorials, EpicTable feels far more complicated in all aspects. It can do a lot, but requires a lot of mouse clicks to access different tabs in the interface. For example, hiding DM rolls is bound to opening a special private tab for it, compared to a tick in the settings of Fantasy Grounds. Of course, which interface you like more strongly depends on taste and the available money.

The tools mentioned above are only a minor part of the vast variety available out there. If you happen to know about a good tool that can help you out in a difficult situation with game sessions, feel free to share it and your opinion in the comments.

Which games do you prefer?
View results