If you follow the news, you must have seen what is currently going on in the UK. The ravaging mobs are setting buildings on fire, looting shopping... 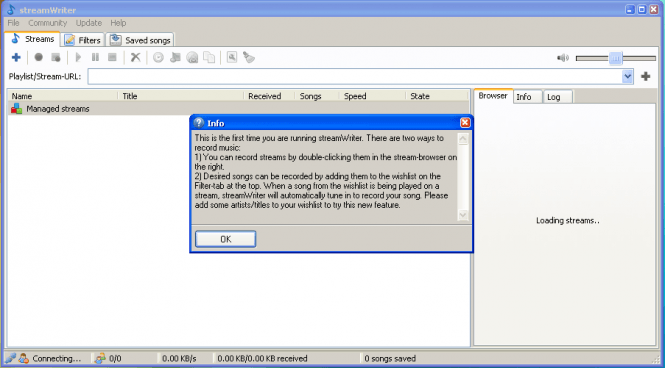 If you follow the news, you must have seen what is currently going on in the UK. The ravaging mobs are setting buildings on fire, looting shopping malls, turning over police cars, and yelling they want more. Moreâ€¦ More what? More freebies, I presume. Everyone loves freebies, everyone wants freebies and...

And as I was watching disturbing news reports from Britain, I thought to myself: â€OK, I love freebies, too. But Iâ€™m a decent, law-abiding citizen. How can I get freebies in a legal way, and the more the better? Say, free mp3s?â€ It was time to investigate the matter. My goal was to find out how I can get as much free music as possible in a legal way. Quite a burdensome quest in todayâ€™s world, where you cannot be sure you are not going to wallow in never-ending lawsuits after you download another ephemeral pop hit. I phoned my lawyer buddy and got the following answer: â€œDude, you must be kidding. Donâ€™t you record tracks from the on-line radio?â€

Yessir, so easy. Recording tracks from the on-line radio is an absolutely legal action; in the USA, at least. In that way you can stock up gigabytes of music on your hard drives and will never be subject to any kind of legal pursuit! The only thing that kept me away from the so much yearned-for freebies was the absence of any kind of software radio recorder on my computer, and this problem had to be dealt with. I phoned my lawyer buddy again and inquired which software on-line radio recorder he used. The answer was as follows: â€œDude, you must be kidding. Have you never heard of streamWriter?â€ 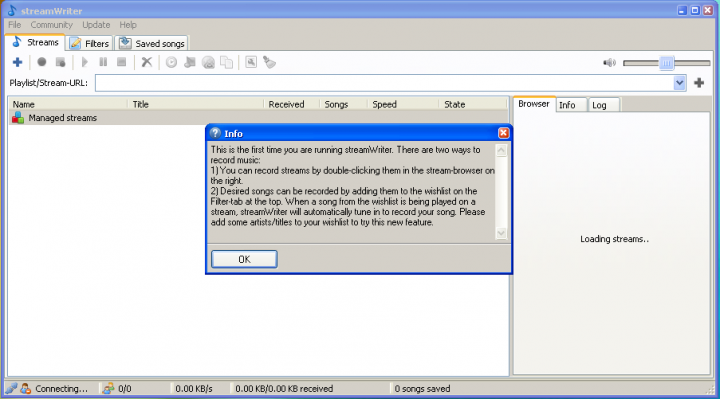 And here we come to the best part of this all: streamWriter. Iâ€™m really crazy about how awesome this program is. Of course there are other on-line radio recorders that look not as Spartan as streamWriter and hence are more user-friendly. However, they all have one significant disadvantage: they all are commercial, which makes them untouchable for a real freebie freak. That's why I decided that streamWriter would be the radio recorder of my choice.

Despite its austere design, streamWriter is comfortable in use and has all the features expected from the software of its type. First and foremost, it records songs from the on-line radio, and it does it well. You have plenty of options in terms of the saved files destination, depending on whether the program is supposed to be portable or not: you can save songs in the program's folder, in a separate folder on your desktop, or in a folder on your memory stick. The recording process itself is as easy as pie: you find a stream in the stream list, right-click on it, and choose the option 'Start recording'. That's it.

However, there is more to talk about than just that. The program features two filters: the Wishlist and the Ignorelist. In the Wishlist, you can enter the song titles you'd like to download onto your machine. So if you want to get one of those Hank Williams' good old hits, just enter 'Hank Williams â€“ Lovesick Blues'. Then you fire up some country music radio streams in streamWriter and â€“ ta-da! â€“ the Ol' Hank is on your computer. As soon as you've got the desired song, the title is automatically moved to the Ignorelist and the song won't be downloaded the next time it plays, thus saving your disk space. Smartly devised, eh? 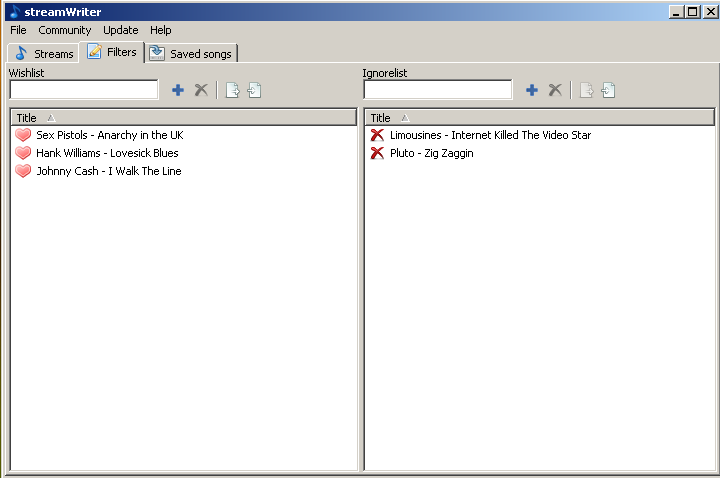 Another helpful feature is the setup timer. It allows scheduling recording, so that the user could get his favorite midnight show by just leaving his computer and streamWriter running. I found it practical to use it along with the automatic shutdown. That way, you can avoid overpaying your electricity bills: today's electricity suppliers are just a little bit better than the British looters in their desire to deprive us of our hard-earned money.

Furthermore, there is a whole bunch of minor features that may come in handy as well. For example, you can set up the minimum free space value, which will stop the recording process when that value is reached. Or you can customize the hot keys, facilitating your stream managing. Or change the minimum recorded track duration (in order to cut out the ads).

The only thing that disturbed me about streamWriter is the community sign-up. It's in German! Well, I'm not that dim and I was able to figure out what Passwort meant. But Benutzername proved to be a harder word to guess, so I had to look it up in Google Translator. Yes, it wasn't very time-consuming, but honestly, why would the registration form to a community of an internationally distributed software program be in German?

This small inconvenience didn't stop me from putting streamWriter through its paces, however. I set up the computer to shut down at 2 am and left four streams running. After getting up, I moved the recorded tracks onto my mp3 player. Thirty minutes later, as I was stuck in a huge traffic jam on my way to work, my newly acquired freebies saved my day and I didn't die of boredom. As I was merrily patting on my steering wheel to Jonny Cash's I Walk The Line, I thought: â€œLooks like we're having a full-fledged alternative to the rioting here. Non-riot freebies!â€