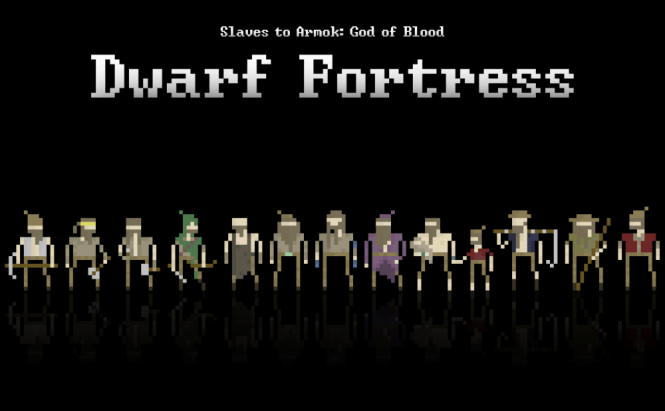 What could three adult males discuss during a lunch break? Women, cars, sports, politics, work... How about their pet dwarves who badly needed some pretty rare rock to create an alleged masterpiece carving, failed to find enough of it, went mad, had to be locked in their rooms, and starved to death? How about a wandering elephant who accidentally stomped on your carpenter working outside, after which the poor fellow bled to death, as well as half of your artisans who tried to loot his body and ran directly into the blood-thirsty pachyderm? Believe it or not, all these things can fuel an extensive discussion, with ladies, BMWs, and the Super Bowl not even getting a mention for weeks. Just start playing Dwarf Fortress. Dwarf Fortress is the most ambitious project the gaming industry has ever seen. It's basically a full-fledged fantasy world simulation, with its history, cities, cultures, wars and battles, rises and falls of whole civilizations randomly generated each time you start a new game. In the upcoming versions, this is supposed to go even as far as creating random religions and philosophies! The resulting huge world can be explored in three game modes: Fortress, Adventure, and Legendary. Playing in Legendary mode, you can look through the history of the whole world: of each city, each dungeon, each elf, and demon, down to who punched whom on which day of which year. In Adventure mode, you'll have to wander around this world in the best roguelike traditions, fighting off evil creatures or wild animals and hunting down people you've been paid bounty for. Finally, Fortress mode is what makes the game so great: founding and managing your own dwarf colony. You can do virtually anything you want, as long as it does no harm to the well-being of your colony. You can go deeper and deeper, mining more minerals you can trade with caravans or forge armor from. The moment you press the Embark button, you become the single absolute ruler of a small dwarf fortress. The scale of the game and the attention to detail is mind-blowing. For example, there is no traditional HP system. Instead, each of the characters (and there are hundreds and thousands of them) has a normal body of flesh and blood that can be damaged in a fight. For example, your dwarf can fall from a great height and break his legs, or your fighting dog's liver can be torn by an elephant on a killing spree. The physics are not neglected either. You won't be able to dig a five-mile long tunnel supported by two matchsticks: the weird thing Sir Isaac Newton called 'gravity' will inevitably come into play and make the whole construction collapse. Maslow and his pyramid were also given a very prominent place in the Dwarf Fortress gameplay: each of your dwarves has his or her own needs and preferences. If you fail to satisfy them, the dwarf's mood will get increasingly somber, culminating in a killing spree wreaking havoc upon your fortress.

It's high time I slowed down and stopped singing praise to the game. Dwarf Fortress has a huge drawback that can shy away the majority of its potential players. First, like almost any roguelike and roguelikealike, Dwarf Fortress was developed by a single person: Tarn Adams aka Toady One. Second, the amount of computations the game has to process per time unit can induce a catatonic state in low-end computers. These are the two reasons why the game by default has very basic graphics. To be more precise, it doesn't have any graphics at all, utilizing ASCII characters, so playing Dwarf Fortress resembles reading the Matrix in the famous blockbuster by the Wachowskis. This problem is more or less fixed if you install the enormously popular Lazy Newb Pack, a bunch of utilities supposed to make the DF gameplay not so unforgiving. Of course, the schematic images of dwarves, who look exactly the same size as colossi or notorious elephants, are far from being 3D models you'd never tell from a real person. Still, it's better than nothing. Anyway, the primitive graphics are not the only thing you might hate about Dwarf Fortress. In the words of a well-known TV series character, get ready for some tough love: no matter how long you've been mastering your RPG and RTS skills, you suck at playing Dwarf Fortress. It's inevitable. The learning curve for this game is just about as steep as a sheer cliff, so the first couple of times you'll play DF, most of the time you'll be staring at your monitor without a single clue as to what is going on and why all your dwarves have suddenly died. This problem can't be fixed as easily. The only way is to renounce your worldly life, read through the sacred DF Wiki, and practice the holy DF gaming for several weeks a couple of hours a day. Hopefully, this will enlighten your burdened n00b mind, bringing Toady One's blessing upon you; your mind will open to embrace the fantastic world of Dwarf Fortress and you won't forget to supply your dwarves with enough booze to help them while away another day.

P.S.: I just couldn't help sharing this link. If you want to understand what DF is about, just read the story of the Boarmurdered colony. If you don't like this game after that... God, it's impossible. You'll love DF. (Warning! Explicit language!)

Previous story Why Do We Need Codecs? Next story Is It Raining Cats and Dogs?