Torchlight 2: And Now Back from Something Completely Different

Torghlight 2 is due for its summer release. What will we get: another Diablo clone or Diablo II as it should have been? As we have already said in... 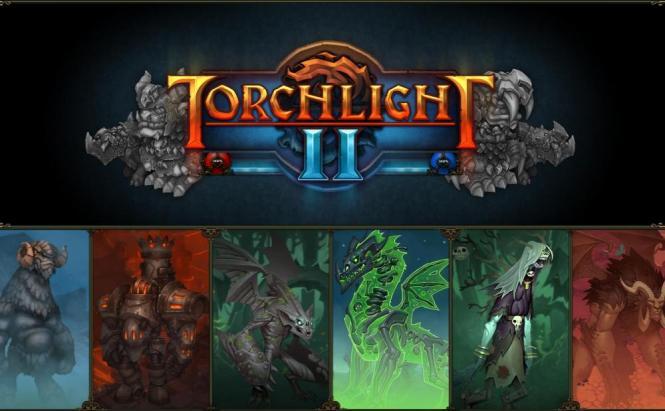 Torchlight 2: And Now Back from Something Completely Different

Torghlight 2 is due for its summer release. What will we get: another Diablo clone or Diablo II as it should have been?

As we have already said in our previous article, Diablo III arouses mixed feelings in the hearts of old-school RPG players. For one thing, the new Blizzard title is an expectedly highly addictive game with smooth, thoroughly thought-out gameplay and enormous munchkinism potential, both of them being key elements to the success of a hack'n'slash RPG. For another thing, loss of the series' dark atmosphere and dropping half of the highbrow features in regard to skills and items could not but put off many oldie players from the third Diablo installment. Visceral scathing of enemy hordes can be and is fun; moreover, it lies at the very core of the hack'n'slash genre concept. However, counterbalancing it here and there with a little piece of thinking is always a good idea. Unfortunately, Blizzard has reduced the thinking part in Diablo III to 'a very-very really extremely tiny piece of thinking'. Instead of contemplative hour-long reflection over the skill-trees and distribution of the stat points, you just go straight ahead, swinging with your weapon over your head and raising the dead with your battle cry.

Thank God, Torchlight 2 came to the rescue the very moment I started losing my faith into the future of the RPG genre. Despite its unimpressive graphics and the overall jolly butterflies-and-flowers look, the upcoming title by Runic Games lives up to everything we lacked in the new Diablo. Here for the top 5 things that are so damn cheesy in Diablo III and so awesome to see in Torchlight 2.

The most irritating thing about Diablo II and Diablo III is that you cannot select the difficulty level from the very beginning. Like it or not, before you get to the real game, you have to walk through the dead easy Normal and the only slightly brighter Nightmare. Don't even think you're good enough for Hell, unless you've spent days yawning on Normal!

Torchlight 2 gives us the alternative we haven't had since the first Diablo olden days: you can change the difficulty level any moment you like. Yay!

Sad but true: most of the loot dropped by monsters in any hack'n'slash game is poor regular stuff nobody needs anymore after the first several hours of gameplay. Still, eradicating the regular items loot altogether is an option that any long-time ARPG player would definitely reject. As a result, you've got to tediously click out the better stuff out of the 'white' loot ocean each time you slaughter a bigger monster crowd. 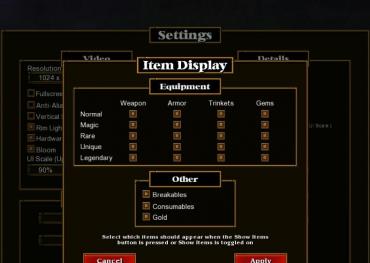 The Loot Display Filter: No More Trash Items in Your Inventory

Torchlight 2 comes up with an ingenious compromise that is simple and elegant at the same time. After a bit of fumbling around in the setting of the loot display filter, you will get only the titles of magical or unique items displayed on-screen. No more 'bucklers' or 'short swords' trashing your field of vision. Finally...

There's no item identifications in Diablo III: your character seems to be as knowledgeable in the magical armory of Sanctuarium as Deckard Cain himself. To justify this gameplay change, Blizzard introduced a major storyline twist in the Diablo universe and (SPOILER ALERT!!!) killed the poor old Horadrim. Now, the kids won't have to bother identifying the loot they've found, a task Blizzard thinks is well beyond the gamers' capabilities. 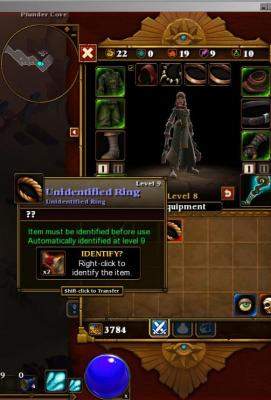 Torchlight 2 retains this game element, however, having modified its concept by introducing an alternative identification procedure. If you prefer to save a precious indentification scroll you can wait, say, till level 8 and the item statistics will be automatically revealed.

The intellectual part of almost any old-school ARPG, the part that calls for some brains and not the ones of your enemies. The primary holywar reason on almost any Diablo II forum. The part that has been almost completely crossed out in Diablo III. 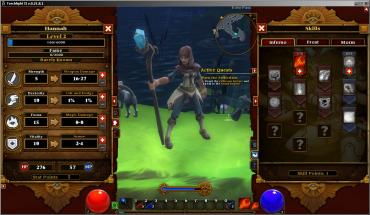 Torchlight 2 is no revelation in what regards the skills and character stats. In fact, it is a rather mediocre game when it comes to the intricacy and originality of these gameplay aspects. On the other hand, Torchlight 2 is tremendous in that it leaves it up to you to decide what skills and stats you want to upgrade or boost. It's so tiresome when the developer spoon-feeds you the way to develop you char and leaves no room for some creativity...

The dungeon maps in Diablo III are pretty iffy for those who purged the Tristram Cathedral catacombs in 1998. They're so Call-of-Duty-ish that you can't help trying to switch to the first person mode. You come in. You see the way. You go down that way. You kill the bad guy. You pick up the loot. Over. Next dungeon. You come in... 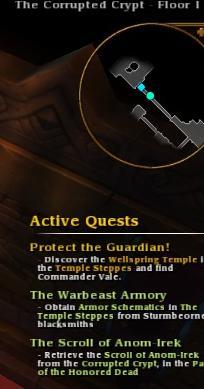 The Best Part of It All

However, all the things we've just been talking about bleak in significance to the Ã¼ber-important old-school feature found in Torchlight 2. There's an OFFLINE play mode! OFFLINE! 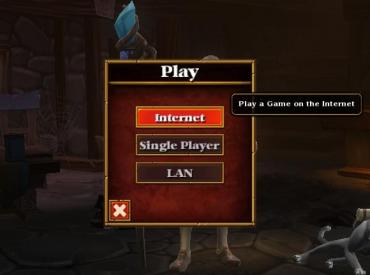 Just imagine: no more server downs due to the daily maintenance, no more account hacks, no more deaths of your hardcore high-level character due to server lags. And above it all, no trammels for your misanthropy. There's just you and the mobs. And then there's only you left.

Referenced Windows applications
Do you like the features in Torchlight 2 more than the ones in Diablo III?

Previous story Diablo 3(7): A Dirge for Blizzard Next story Protecting Your Children from Cyberbullying

I really like the small secret stuff in the game. Many areas have objects that arent highlighted but if you figured out what to do , you get a reward ( the robot part quest for example ).

Don't worry about it, guys; Path of Exile is better than both.

1. I really HATE games that allow you to change the difficulty level mid game, this is just ridiculous and remove all epenis potential of my achievements, i went back to my Vega save the other day and played for a few hours before realising i had defaulted to NORMAL!!! the difficulty is not saved in the save file!
This ruined my character for me.

2. I like comparing the loot, nice feature but not a dealbreaker

3. Sounds like an interesting gameplay choice, yet to be honest I think that having to identify the items at all is fairly pointless, it makes sense in DnD style RPGs where you find some mysterious magical ring and it may be powerful, it may get stuck to your finger. But these games are about a constant stream of "treasure".

4. Call me a cynic but I played Torchlight one and it is a Diablo style game, it's not a thinking game, it's not neverwinter nights 2, i think removal of skill points both left me in shock and awe about what this game is and Diablo 3 now feels a bit closer to DOTA or something. The thing is it works, it works great for this type of game because you can not worry at all about making a wrong choice, an it' the only fair way if you consider there will still be a lot of balancing to the skills, in an online environment you need to consider that buffing or nerfing a skill could leave players with hours of wasted grinding.

5. I guess it depends really on HOW MUCH stuck you want to be. This argument that D3 does not have random dungeons is ridiculous, it randomises in very clever ways, rather than straight up grids D2 style, they try to randomise purpose into the maps. I like it. They'v taken the concept further, addressing the main problem people have with random games (random RPG's fell out of favour compared to designed ones).

BEST PART OF IT ALL:

Blizzard forced online mode, this means there is no barrier to online play, and there is no cheating (or at least it is not easy). There's absolutely no situations where your mate has been playing so long off-line he won't want to come online and start fresh. Blizzard absolutely cannot allow you to level up and collect stuff offline for obvious reasons, you could just start duplicating your items, resurrecting hardcore characters etc, not to mention creating godlike PvP characters by pushing the item randomisation to the very highest possible rolls. Torchlight is a cheap game wih no support for this, it's fair enough they should just give you access to everything.

Further point, Torchlight 2 looks even more like world of warcraft than Diablo 3


Hopefully some of that might explain why things are different with Diablo 3 and why some of us actually have considered both titles and think Diablo 3 is the better game, nothing to do with something being mainstream or not

Oh god, that was a rant lol

Sorry for not jumping on the love/hate wagon with a more elaborate reply, I pretty much vented out in my comment on D3 in the previous article; but these features do really click with me. They all work two ways, after all. Consider this difficulty changing thing: I started T2 on Normal; then, halfway through the second map, I realised I wanted more challenge - so I joined a higher-difficulty server. My active quests, inventory, and skills retained. My time saved, too. )
Oh, and those 'secret areas', yum. I don't know, there was something special about 'activating' sculls in Doom and hearing some distant hidden passage revealing for a second or two. Even if all you found in those places was a couple of armour shards, it still felt great.

... which it did in its previous installment (quite unlike Diablo).

"Blizzard forced online mode, this means there is no barrier to online play"

... as well as no barriers to server malfuntions on the daily basis (around 8 PM in Australia: ask the Ozzies about their opinion concerning the Blizzard servers and you'll learn much about th Australian obscenities), account hacks (max 15-character long password with 36 possible characters, case-insensitive, NO BRUTAL FORCE DEFENSE), dependency on your Internet provider (yes, there are plaes where they still suck). etc.

"it's not a thinking game"

... which does not automatically mean there should be no thinking part at all. When there's not thinking in an RPG, which even has the prefix A-, I get bored in a couple of hours. I NEED some thinking and I LOVE ARPGs better than Neverwinter Nights or Baldur's Gate.

"Diablo 3 is the better game"

I'ma having some bad news for you. We're no in the second decade of the 21st century, where people have long found out the words 'better' and 'worse' are something for the Spiderman comics and war films. There are no such things as 'better' and 'worse', there are 'like it' or 'don't like it'. The only context where the word 'better' is still mking sense is with the word 'like'. I like Diablo III, that's a very nice game, and I like Torchlight 2 better. Neither of them two is going to revoultionize the genre, as Diablo II did, but they're both nice games, of which I choose Torchlight and you choose Diablo III. I told you my reasona and you told me yours: and we shouldn't forget we're different people with different tastes and blah-blah-blah. So, if you still want to operate with the notions like 'the better game', you could try living somewhere in Russia or Syria: they're having it easier with categoric opinions.

And the community is way friendlier. T2 is a perfect world thus far.