Mario, a mustached Italian plumber fighting against mushrooms and turtles and saving princesses from dragons, turned 30 last year. Whether it was the... 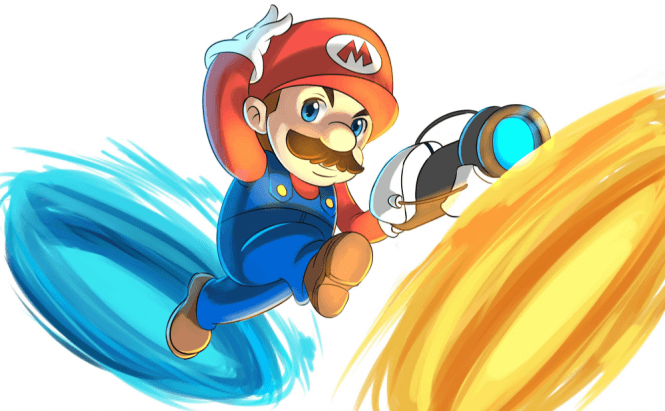 Mario, a mustached Italian plumber fighting against mushrooms and turtles and saving princesses from dragons, turned 30 last year. Whether it was the reason or not, 2011 saw heaps of new cool Mario mash-ups that we can't help telling you about.

The first time that the chubby Italian-American plumber was first featured in a video game was in the far 1981, in an arcade game Donkey Kong. In those primordial times, his name wasn't Mario yet; instead, he was referred to as Jumpman (sacrilege! sacrilege!). Since then, Mario has appeared in more than 200 video games, selling over 100 million copies worldwide (Super Mario Bros. alone has sold more than 40 million copies). Mario has become the most popular video game character of all times, being avidly revered by tens of thousands of fans from all over the world. He was featured in dozens of comics, television shows, films; the Mario merchandise brings its manufacturers millions of dollars in revenue annually; long story short, Mario has become the supreme video games icon, forever and ever.

That's why Mario's 30-year anniversary could not but inspire indie game developers from the all over the globe to refresh the immortal classic and create their own Super Mario Bros. mash-ups (a combination of several original game stories within one game). The algorithm of developing a neo-Mario game goes like this:

3) Adjust the Mario original gameplay to the new concept;

And here are the three best Mario-like games we've picked out for you on the Web.

The core idea behind this game is providing Mario with the portal gun, an iconic weapon from the Portal game series by Valve. Shooting this gun by pressing your mouse buttons, you can create either of the two portal ends: blue and orange. After both ends have been placed, you can use them as a doorway, cutting long on-screen distances or setting traps for enemies. And believe me, it's the most sublime pleasure in the world to watch a crowd of mushrooms falling into a pit after entering the portal you've just set up for them... 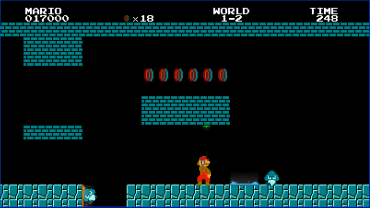 The snag of using the portals is that as any object is going through the portals, its initial momentum is conserved. GlaDOS, the main antagonist of the original Portal games, puts it like this: 'In layman's terms: speedy thing goes in, speedy thing comes out.' In the 2D Mario world the conserved momentum is complemented by the conserved movement direction, a small detail that has cost me several dozens of on-screen deaths.

This game reminds me very much of The Expendables, a movie starring Silvester Stallone, Bruce Willis, Arnold Schwarzenegger, and all other major action film stars. In this game you can play as nine of game consoles' iconic characters, including Bill Rizer from Contra or Ryu Hayabusa from Ninja Gaiden. NINE! And they all keep their skills from their original games! 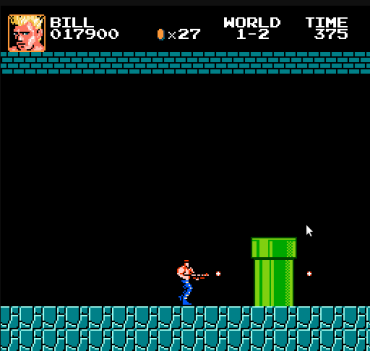 I don't know about your but I can only think of ve-e-e-ery few things that are more exciting than frying Bowser's... Browser with the flamethrower from Contra or totally Zelda-like coming at Goombas (that's what the living mushrooms are called) with your sword.

The first five seconds of this game look totally like the original Super Mario Bros. You encounter that first Goompa, get you first upgrade mushroom, go further... and there we are. The rest of the level looks like a painting by Salvador Dali: the bonus blocks are lonely floating in the air, the never-ending streams of Goompas are coming out of the pipes hanging somewhere at the screen top, and the huge massifs of regular blocks are running up to the height Mario could never reach jumping. Could never reach jumping but for the Tetris blocks, I mean. 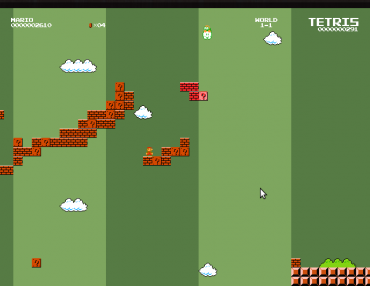 Yes, this mash-up is a hybrid between Super Mario Bros. and Tetris. The major idea of this game is a violent distortion of the original game design, making it looking surreally weird. I'd say, the game design in Tuper Tario Tros. is a bit reminiscent of M.S. Escher's lithographs. At least, it is as mind-breaking, because playing this platformer is a really challenging experience. Only the very best will make it to the end. I didn't.

Referenced Windows applications
What is your favorite Mario game?

Mario Go Fish is an exciting game. I have not played this game for many years as the software is missing in my PC. Mario is funny and I like it very much. Please help me to recover the Mario Go Fish software into my PC. Many thanks.

I like Mario
He's funny and the game is active and interesting.
I even didn't know that there are other versions of this game, I will try them all. Thanks

Mario is a game of my childhood) I like it!

Mario and dinosaurs have won my heart. It happens that I haven't played this game long. But I miss it sometimes and, perhaps, I'll find time to change the situation at the weekends.

My vote is for Tuper Tario Tros.
I prefer the non-violent fun games.
LONG LIVE MARIO.