Another report from the IT-future: in the light of the recent events, the mass surveillance world dominated by some big brotherish juggernaut... 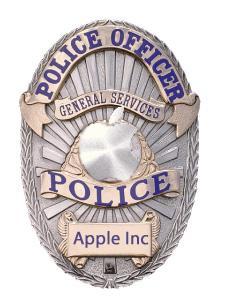 Another report from the IT-future: in the light of the recent events, the mass surveillance world dominated by some big brotherish juggernaut IT-companies is not the likeliest scenario any longer. The most probable future that awaits us is that from the fabulous Johnny Mnemonic movie with Keanu Reeves. In that movie the Earth is governed by evil multinational corporations who have taken over the reins from the state. Two weeks ago the world saw first signs of this fiction coming true. Sergio Calderon, 22, had a whole pile of fun when two security officers of Apple broke into his cozy little apartment, bringing along a bunch of cops and a two feet high stack of plaint notes against him. Reasons? They had grounds to believe he had stolen a prototype of iPhone 5. No device was found in his apartment. It turns out that if Apple's security officers have grounds to suspect you in keeping prototypes of their devices in your wardrobe, they can intrude into your home and turn everything upside down, not even taking the trouble to explain they are not policemen. 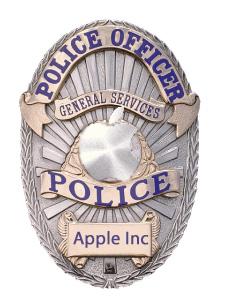 Apple Inc. Police Department: Because We Can

That's not the only real-life cyberpunk plot that made headlines in IT-media last week. It seems that not only devices get filched from tequila bars these day, either do beta versions of potentially best-selling cult games. In case you haven't heard about it yet, gameplay beta footage of Diablo III leaked onto the Web last week. The source of the leak is allegedly some mysterious Blizzard ex-employee who got really sour about his former bosses. Well, that sounds plausible, doesn't it?

In my opinion, not plausible enough. For it is quite suspicious that the beta footage leaks shortly before the beta is launched and contains long-promised features that Blizzard has been talking about for ages but didn't venture to materialize them for us. Diablo's avid fans who have been waiting for more than 3 years (me among them) could finally take a look at the object of their yearnings, however dull and grainy the pics are. Now they are speeding to subscribe themselves to the upcoming open Beta testing of the game, making Diablo III a great publicity.

To my mind, this leak is nothing but a marketing gimmick, a sneaky maneuver to attract public's attention to the game. Not the smartest gambit ever, but it seems to work fine. The hype around the stolen iPhone5 seems to be nothing but a similar ploy. However, this idea doesn't look so fresh: the Cupertino eggheads have pulled off an identical trick just last year, as iPhone 4 'got stolen' and Apple, Inc. presumably initiated raiding the house of a Gizmodo journalist that had reviewed the device. The odds are, it was a deliberate step, since leaving prototypes in bars and raiding journalists' houses attracts a substantially wider publicity than the habitual marketing gobbledygook of the company's CEOs in black turtlenecks.

The similarity between the unconventional marketing strategies of the two companies is so great that I can't help thinking about how these IT-giants are similar to each other. Indeed, they have so much in common that it's strange the Internet isn't still puffing up with articles on that topic.

The major point of convergence between Apple and Blizzard is that the both companies are greedy. Without giving the pricing scheme much thought, they charge an arm and a leg for their products and services so ruthlessly that even John D. Rockefeller would envy them. Apple's avarice have long become a byword for greed among people familiar with the current IT-market, but you may wonder, what's so wrong with Blizzard's pricing politics? There are lots of things wrong, actually.

Let's take, for example, Starcraft II. Imagine you want to purchase the game. You consult the site, maybe even register a Battle.net account. If you are a sadomasochist, you purchase a cheaper version of the game for something like twenty bucks and then pay Blizzard a monthly subscription fee. If you are not so rich to buy cheap things, you clench your teeth, part with your hard-earned sixty dollars and have a copy of Starcraft II shipped or downloaded onto your computer. These two types of purchasing the game are the first two things that I would call totally wrong. Yeah, okay, as for the latter one, I cannot make any sensible objections other than stating that sixty bucks are quite a sum for such an old meanie and freebie hunter as me. The subscription model is on the opposite a bright example of an acute greed attack: for Godâ€™s sake, tell me, why should I pay for the game that Iâ€™m going to pay again and again later? They could have allowed players to choose if they want to pay either only for the subscription, or for a game copy, but no, they want all the money they can lay their hands on, millions of Koreans will buy the game anyway. If you try to understand what you give your money for, youâ€™ll discover a couple of cute surprises Blizzy prepared for you as soon as the game installation is finished. First, you twig you've got to be constantly on-line, otherwise you can't log in. That would be logical for the subscription model, but if I buy a game copy I donâ€™t want to depend on the whims of my Internet provider. Second, Starcraft II doesn't support playing over a LAN and the only chance to fight with other players is through Battle.net. More than 220,000 players joined the petition to Blizzard asking for including LAN support into the game, and no reaction whatsoever followed. Moreover, taking into account the previous announcements that playing Diablo III would also require a constant online connection, it would be logical to assume that LAN wonâ€™t be supported in Diablo III either. Prepare for the advent of another all-pervasive quasi-monopolistic net store: this time it is going to be the â€˜Battle.storeâ€™.

Thatâ€™s where we come to the second similarity between the two companies. Both of them have a huge fandom whose fanboyism has definite features of a religious cult. Still, both Apple and Blizzard squeeze their poor fans to the last drop, without responding to their desperate pleas to change this or that feature. For example, Apple doesnâ€™t care hundreds of thousands if not millions of their fans from all over the world would be more than happy to see flash-support on iPad. The profits that would be lost in case people get a full-scale access to the YouTube or Hulu content have a much higher priority than the needs of faithful Apple fans. The same is true for the Blizzies: despite the above-mentioned petition they keep sticking to the Battle.net-based multiplayer in Starcraft II. Quite predictably, this attitude of giving money the priority over sense has already brought some ugly inedible fruit, as 3 large Starcraft tournaments were nearly disrupted due to diabolical lags on Battle.net, Blizzardâ€™s own world championship among them.

Oh, by the way, Blizzard spoils the sports component of Starcraft II in one more way, which is also ridiculously similar to Appleâ€™s recent suing passion. The game developer stopped negotiating with Korean e-Sports Player Association (KeSPA) and thus broke up with a long-time partner. Everybody used to think their co-operation was mutually lucrative, since Starcraft is practically South Koreaâ€™s unofficial religion. However, the guys at Blizzard thought KeSPA was cheating on them giving a less share in profits than the Blizzies expected and gave the Koreans a kick in the buttocks. After a brief familiarization with the story how Apple threw Samsung out of the partnership boat, one can be really overwhelmed with the stubbornness, with which the Koreans are defending themselves against the mighty US giants. Thatâ€™s what I call determination!

World of Maccraft: Wrath of the Greed Kings

The degree of similarity between the two companies is so great that Iâ€™d like to come up with a fresh idea: why not merge them into one entity, something called like Appard or Blipple? The resulting corporation could even expand the range of products and services it would provide. Just think, how awesome it would be, if you could buy bread only in the on-line â€˜Macattle Storeâ€™, if you couldnâ€™t flush your toilet unless you'd have a constant online connection with the unified companyâ€™s site, Bapple.net, if you couldnâ€™t start your car unless you had bought a specific applicaâ€¦ sorry, blipplication which would be called something like 'iGnition'. I think in this case all the fans of William Gibsonâ€™s cyberpunk fiction could rightly say itâ€™s no fiction anymore. Oh, wait, is it still?

Previous story “Where flowers bloom...” Next story Not with a Bang, but a Whimper

I like the general tinge of atheism that's being emanated by the would-be rivals of these two: 'See, we've got this new tablet with piano-black edges, and multitouch, and apps...' - 'Saw that already, move along...' - 'We've also got Flash on it.' - 'Hey! I'll take two!'
You've got to love the Torchlight 2 marketing for the same attitude: instead of spewing out blurbs like 'next-gen graphics!' or '80 hours of epic story-driven gameplay!' they just said 'We're giving you LAN and full modding support. Do whatever you want.' Ah, bless them.
Call it envy, but I've never given a monkey's about Blizzard's games since The Lost Vikings, or about any Apple's product since... forever; but it's always irritated me how, despite my not caring about my not giving a monkey's about them, people around me still get dragged into these shiny cults. Actually, scratch that, you can't call that envy. *Looks around and sees no one* I'll call that 'blizz'.
And I'll copyright that.
Are these two having their centuries of crusades and mutual slaughter any time soon?

Well maybe you have no reason to dive into exciting universes by Blizzard, but it, in no way, means that others do not mind the opportunity to escape the reality of a long commute to work, politics at work, nagging parents, absence of friends by being someone/something and killing a couple of creatures along the way. LOL