Developers Claim Windows 8 is a Mistake

It's just sixteen more days before Microsoft finally releases Windows 8 for purchase. The top management puts much at stake rolling out the new... 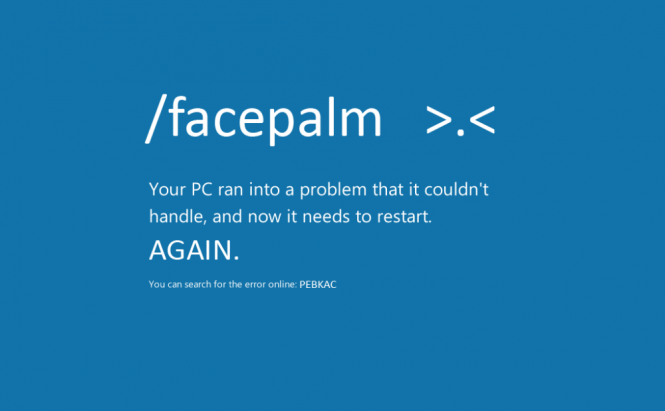 Developers Claim Windows 8 is a Mistake

It's just sixteen more days before Microsoft finally releases Windows 8 for purchase. The top management puts much at stake rolling out the new operating system; the company's CEO Steve Ballmer also sets great hopes in the re-invention of the corporate image brought along with Windows 8, as he faces the Microsoft share price dwindling slowly but surely. All the more disquieting are the alarm signals coming from PC developers: many of them believe the direction Windows 8 is taking is one huge blunder.

The major point of criticism is the new Windows Store, extensively mimicking the enormously successful App Store and Google Play. The new distribution platform will be a closed eco-system with Microsoft as the only agent between developers and end-users. The introduction of Windows Store signifies a major departure from the company's previous policies towards third-party software. Previously, Redmond kept Windows open for third-party developers, who were free to make and sell software the way they saw appropriate. Looks like these days are gone now.

'For us developers, the game field is getting smaller and smaller, being pushed to pass through the funnel of some big company or another,' JoaquÃ­n Bernal, the creator of Q10, said in his interview to Wired. He was not alone in his lamentations of freedom taken away from developers. He's supported by Markus Alexej Persson aka Notch, the legendary Minecraft creator, who denounced the Microsoft policies in his recent tweet: 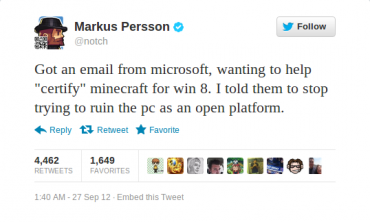 Some big names in the game industries were also disgruntled with the platform being sealed. So, Valve's Gabe Newell came as far as stating that 'Windows 8 is a catastrophe for everyone in the PC space.' Bob Pardo, Vice-President for Game Design at Blizzard, agreed with this position, posting the following tweet: 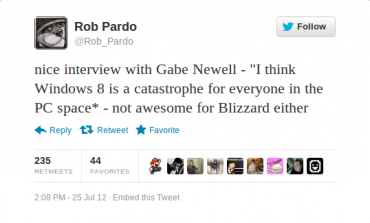 Desktop for the Greedy Ones

The official reason for launching Windows Store is making the PC safer, because Windows is notorious for its being the platform most prone to malware and other security threats. However, a 30% fee for all revenues from app distribution, which Microsoft asks for featuring an app in the Store, suggests that the actual motives are financial ones.

This very 30% fee also causes major unrest among software developers. 'Thatâ€™s an objective downside, a big one,' says Bernal. For most small dev teams, the one-third cut in app revenues is a serious threat to their well-being. In fact, putting them into a financially disadvantaged position can massively discourage development of new apps for Windows 8.

Albeit there is a way for PC developers to keep all the money in their own purse. The desktop version of Windows 8 has two different use modes: the touch-oriented Metro UI and the traditional Desktop UI. The latter will still be supporting the whilom 'whatever-you-want-in-any-way-you-want' distribution model. The huge drawback will be that the Desktop UI-based apps will not be available for launching from inside the Metro, which practically cuts them off from mobile devices. In the upshot, the new distribution platform by Microsoft seems to establish the profit cut-down fork for developers: they'll either have to pay Microsoft or accept that the potential user audience will shrink dramatically.

Referenced Windows applications
What is your Windows 8 user experience?

It's great for sheeples who don't really have anything to do. I'm also tired of a sales pitch in every app or screen that I select.

I can no longer access Internet content and manipulate it's resources with sufficient ease or versatility. My autonomy over files and programs have been dramatically scaled back. Windows 8 is not allowing me to get anything done.

Microsoft trying to force developers to give them 33% of their profits to let them "certify" their software for Windows 8 is just plain silly. Consumers are not buying the OS and developers do not like it one bit, yet Microsoft still tries to force it down people's throat.

While Microsoft is experimenting with their silly metro interface and removing start buttons that end users actually used & liked, Android has become the new platform where you can find software for everything or make your own to spur innovation, and it has become the clear winner to both consumers (sales) and developers (software) iOS is also quite a success, on the other hand Windows 8 & Windows Phone are the latest blunders in Microsoft's record.

Microsoft might still do well in the desktop unless they continue to self-destruct and let Linux and Mac take over the PC segment.

You are being watched. They know where you are. They know what you're doing. There's no escape. Aaaaaaaaa!!!111

After reading the article, the question arose in my head: will developers have the courage to announce iPhone 5 as a mistake?)

So annoying! Microsoft u guys better know what u are doing!