Now that you have learned some basics about The Elder Scrolls games, we're finally able to discuss the latest installment in the series, TES V... 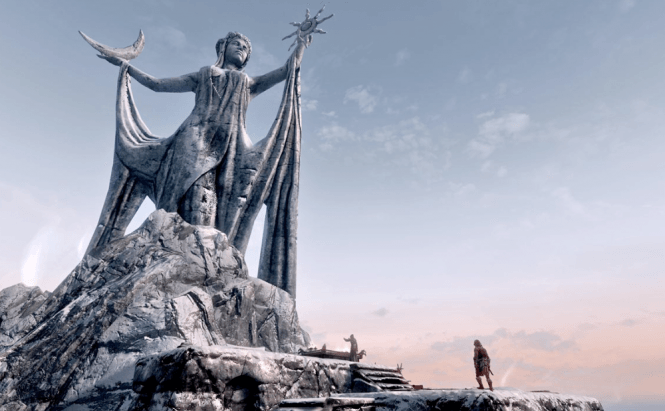 Now that you have learned some basics about The Elder Scrolls games, we're finally able to discuss the latest installment in the series, TES V Skyrim.

The game was was first announced in October 2010 in Los Angeles and has been avidly awaited ever since. The information about the future TES title, disseminated to the press, was quite sporadic and inconsistent. Game Informer published the huge 14-page article about Skyrim this February. In summer, TES fans and regular gamers first got access to a 30-minute gameplay demo featuring a short dungeon run, a minor skirmish with Giants, a new hostile NPC type in the game, and a major skirmish with a dragon. At the end of October 2010, the inevitable happened, and some game content leaked into the Web. On November 1, 10 days before the official release, Xbox 360 owners were the first who could download from the Web a playable leaked version of the game.

Finally, the yearning TES community lived to the glorious moment, and on 11.11.11 the game was released for all platforms. Crowds of players from all the continents rushed to buy the new Bethesda title, and...

And let's see what they got.

The game definitely has quite a number of odds. First and foremost, it's buggy. No, 'buggy' is a wrong word, it's not just buggy, it's extremely buggy. Fortunately, not to the extent of the initial release of Daggerfall back in 1996, when some game trigger wouldn't work and the player could not finish the game's main quest; but the list of technical and gameplay issues in Skyrim is far from being short. So far, the community has been able to find close on two hundred bugs, and the list is still not complete. The major issues lead to significant slowdown of the game, down-scaling on Xbox 360, and crashes on PlayStation 3 and Windows. Long-time Bethesda fans might notice that the Windows version of Skyrim has the same save file issue that used to spoil the pleasure of playing Fallout 3: as soon as the save file size reaches 6 MB, everything starts going wrong, crashing and slowing down all the way as you're advancing in the main quest. Bethesda promised to fix the major bugs just after Thanksgiving, but the oldies should remember that it took developers a fair bunch of patches and a couple of years to do the same for Morrowind, and some code and game glitches are still there.

Other than that, high-profile cheaters have already dug out lots of exploits, overlooked by Tod Howard and team. This is quite likely the most famous one (here I should remark that the video was published on YouTube one day before the official release – piracy prevails!):

I don't know whether you've really got how messed up the whole thing is, but I was literally stunned when I saw this video for the first time. 5 years of development, millions of dollars, megajoules of effort, hundreds of sleepless nights in the office (I bet they had those), and... And the whole thieving gameplay line gets screwed up just because NPCs react to you putting buckets on their heads like: 'What are you doing that for?' Without any further questioning. Seriously, somebody's gonna get fired.

Unfortunately the technical issues are not the single problem with Skyrim. Perhaps even a greater one is the game's totally botched user interface. I would agree with Eric Schwarz from Gamasutra, who suggested 'awarding' Skyrim with the dubious title of 'the worst game UI of all times', because I have never seen a more inefficient menu system in my whole life. The good thing about it is that it's really neat. The bad news is that its neatness is traded off for the UI usability. The hyped-up 3D models of the player's items are definitely very pretty, and the amount of effort put into them by the game designers deserves a bit of appreciation, but I don't really see why they should occupy about half of my screen space, providing me with almost no relevant information apart from how cool-looking they are. Moreover, I don't see why these near-useless models have replaced the nice paper doll we saw in Morrowind and Oblivion: it helped the player immediately get the idea of what items I was equipped with at the moment. Instead, I should always keep in mind which sword I've got in the right hand, or maybe it was the fireball spell or that ice-enchanted ax. As if it were not enough, the player cannot compare an item in the menu with the item he or she is equipped with (no matter how Apple-like Blizzard is treating its clients nowadays, they haven't failed to add this feature to the UI in Diablo III, by the way). The last but (by Jove!) not least drawback of the UI is the incredibly beautiful, but absolutely unhandy 'skill constellations': I can call it everything but intuitive. For example, if you go up two skill trees that are relatively far from each other in this menu, looking for a specific skill feels more like a mini-game. To crown it all, the faces of the NPC we come across in the game would definitely not make it far in the Miss Universe competition. Many of you should remember the Wood Elves in Oblivion, their faces all looking suspiciously similar to Boris Yeltsin and haunting the player in nightmares for weeks. To my regret, Skyrim cannot conceal the fact its graphics engine is a re-worked version of the Havok engine that we saw in TES IV. The Skyrim elves look not much better than their relatives from Cyrodiil. The same is right for many other characters. Skyrim Wood Elves: They Would Not Make It Far in the Miss Universe Competition

On the other hand, the enhanced Havok engine is something I would praise the game for, because now the player's character feels an order of magnitude more real than in the previous TES games. I do not agree with the criticism that fighting does not feel physical enough. Guys, we're playing an RPG, remember? Moreover, this RPG is mostly about the world and not about butchering another hundred of the undead in Lut Gholein's sewers or mashing hordes of cacodemons, right? Leave the fighting physics, 'feel of the weapon,' and all that stuff to the munchkins from Battle.net; that's not why I have paid my money for this game. To say more, fighting in Skyrim is way better than everything we have seen in TES games so far. Now you cannot just click your enemies to death, you have to develop... to develop... wait for it!.. to develop a tactic!

Talking about the pros of Skyrim, one should notice that the character's movement, the sounds of his or her steps, the weapon sounds in Skyrim are setting the new sound effect quality standards in the RPG series by Bethesda. The generally nice impression from the auditory side of the game is nicely set off by the great music playing in the background. It fits into the game's solemn and somber atmosphere perfectly, at the same time not distracting you from what is going on on the screen and not tiring in you in a couple of hours, as was the case in Morrowind.

And, of course, the most important element of the TES gameplay is there: the atmosphere. Just like any previous TES title, Skyrim has its own aesthetics, the aesthetics of the eternal cold, twirling snow, and deadly blizzards. The Skyrim's look lies somewhere between the weirdness and foreignness of mushroom cities in Morrowind and Tolkien-like shining castles in Oblivion. That's just exactly the kind of a fantasy world we've been waiting for so long, the world that makes you forget there is a real one. In spite of the screwed-up UI, occasional lags and retarded elven faces, I got completely immersed into the game and came back only after my alarm clock informed me that if I didn't set out to work immediately, my boss would show me what's what. Honestly, the eight hours I was playing Skyrim were the shortest ones in my life. This engrossing magic of Tamriel is the reason why I have forgiven Tod Howard for all the issues in this half-baked game. A Dragon Attack in Skyrim: In Moments Like This One You Can Forgive Bethesda for Anything

Six months ago, Bethesda announced that Skyrim would be the last game in the TES series. This statement was quoted in the Wikipedia article about the game, as well as in many articles in authoritative gaming magazines.

However, after getting to know the game plot, I got a bit confused: while the main quest story has the unequivocal conclusion, the frame story of the Tamriel Empire ends with a cliffhanger (spoiler alert: the player's action on behalf of one of the game factions will greatly contribute to the uncertainty dominating on the continent). With all due respect to the Bethesda executive, I can't believe Skyrim is the end.

Certainly, we'll see at least one major Skyrim official expansion pack, as was the case with both Morrowind and Oblivion. Howbeit, I don't see how the developer could bring the story of Tamriel to its logical end in 15 additional hours of gameplay (the average walkthrough time for a game expansion). I don't even see how they could do it in two major expansions.

At the same time, I've failed to find any mention of Skyrim being the last installment in the TES series in the current version of its Wikipedia articles. Neither is it to be found on the official web page.

And there are at least four provinces of Tamriel TES players have never visited.

It would be the most heinous of teases if TES ended before getting to see the other provinces. I've always wondered what Black Marsh would look like, and it'd be at the very least a wasted opportunity. If nothing else, they'd be great DLC fodder.

Also, there are subtle hints throughout the series that the prophecy described in the Elder Scrolls may not be "complete". Correct me if I'm wrong, but the very nature of the 'Scrolls makes them almost impossible to fully decipher. That fact alone could be more than enough of a seed for Bethesda to justify a sequel stretching either beyond or completely separate to the known lore.

'A sequel stretching either beyond or completely separate to the known lore' would disappoint me so much that I would delete all TES games from my computer and burn all their merchandise I have.

Yeah, and you're right, it would be so unfair of Bethesda to end the series on such a cliffhanger, The only thing I fear is that they are going to launch an MMORPG. That would ruin the whole thing.