Once you used a Media Center, it is hard to imagine how you can live without one, take my word for it. In my previous article I talked about XBMC... 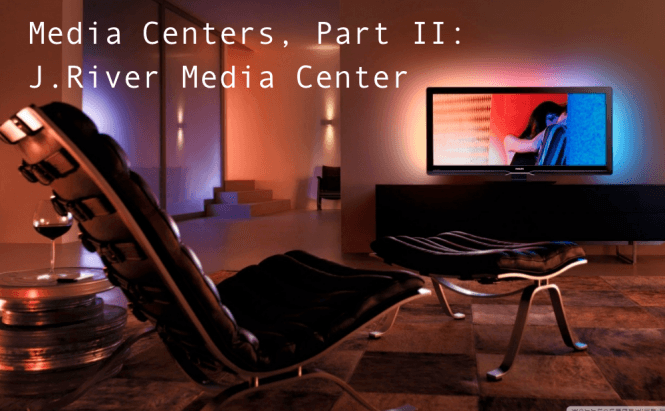 Once you used a Media Center, it is hard to imagine how you can live without one, take my word for it. In my previous article I talked about XBMC and how I am going to use it for the hot parties in summer 2011, but to do so, I will need some expensive tech. But if you do not have money, this alternative requires your own computer (hopefully with a wide large display) hooked up to some sort of amplifier and the Windows operating system installed only. Your parties can still be hot without additional expenses. In fact, there are many advantages of J.R. Media Center over XBMC and other Media Centers, so let's take a look at it.

J. River's Media Jukebox was released sometime in 1998-1999. As the program evolved and the new features were added, it was decided to rebrand the application into Media Center sometime early 2000s. In 2008, I guess to celebrate a decade of improvements, the company released a free, many features stripped version of the Media Center version 12 and called it by the application's original name: Media Jukebox. Meanwhile the company concentrated on bringing the new updates and features to the MC, which is currently available in version 15 (MC15). As of January 2011, the company now entered the wireless media hardware market. A device that cost less than 100 dollars (according to the press release) paired up with the 50 dollars J. River Media Center will allow you to playback files from your computer elsewhere in the house or the office wirelessly.

The J. River Media Center can only run on Windows operating system. It is possible to run it using Wine but it will be highly unstable and will be lacking some of the Window's based features. Those disadvantages are in addition that Linux already has some good players available for free, making the MC15 worthless for use on Linux-based systems.

The menu has many attractive options. The application automatically scans the storage media for the supported files and adds them to the library into appropriate category: audio, video, and bitmap. Within audio, video, and images menu you will find "views". A view includes the library items sorted in a specific way, such as Date, Filename, Author and so on. Drivers and Devices option gives you a chance to add media from your external media. The program supports podcasting, which many internet users will find an attractive feature. Performer store allows you to purchase certain tracks after previewing it for 30 seconds from some online store that J. River partnered with (I think Amazon?). Smart playlists are attributes of all modern media players and MC15 is no exception to this rule. You can create your custom smart lists under Playlists option. Playing now will show you all the recently played files along with what's â€œplaying nowâ€. Action Window is my favorite pane in the program. It is a short access to some interesting options for the files you are working with, such as burn CDs, rip media, explore pictures on your camera, or edit a files meta tag data. The action menu content changes depending on available tasks for a particular file type (pictures shared online, audio converted, video shared on Youtube or something).

This Media Center comes with many settings for all supported types of files, hardware, and software plug-ins. This application supports various remote controls, handheld devices, services, media networks, and various media types. The player is somewhat customizable as you can choose what skin to use but it won't change the location of all panes of the player.

The Media Center comes in 5 views. Those are standard, mini, display, theatre, and cover art views. The theatre one can be used with your large TV or projector screen. The navigation can be done with some smart phones or wireless keyboard or a remote control.
In the previous MC releases there was a party mode available. This mode allowed you to setup a password, so at the party the guests would not be allowed to mess around with the current playlist and do whatever they please. There is a party mode in the latest MC15, but I was unsure how it works. There was a check mark next to it, but I could do anything I wanted with the playlist, including skipping and deleting tracks. Maybe it is a bug, or maybe I need to spend some extra time to figure out how it works, regardless it is a big minus in the sea of only pluses for this media center.

I used this player to fix tags on all of my audio files. This application is great for fixing tags on your mp3 files, adding album art with its internet lookup service, and organizing your music on your hard drive by moving your files according to specified criteria. Before I import music to iTunes for exporting to my iPod, I fix all of it in MC. My library on iPod touch has all the cover art and it is well organized.
As far as using this application for the Media Center purpose only, I do not think so. You can, but I wouldn't. The primary purpose of this software's development is a media center on your pc. It is not a theatre media center type application, even though it does have such function. As a result, the theatre view is a bit confusing, bulky, and I would even say somewhat unpleasant. When comparing with XBMC, Media Center's theatre view is just a collection of words and unrelated, poor quality pictures. But as far as a media center on your pc, I say this is a must-have application for everyone who has iDevices and everyone who likes their media organized.

You can read our site's independent contributor's opinion about the J.River's Media Center here: Media Center. The review enlists all of the additional benefits and features of this great application and if you are interested in checking this software out, I encourage you to check the review out as well. Previous story Feeling at Home? Do it Yourself! Next story Don’t Forget!