Wanna get frightened? Wanna tremble with horror? Wanna experience the real fear and despair? Here to the top 5 scariest games ever. 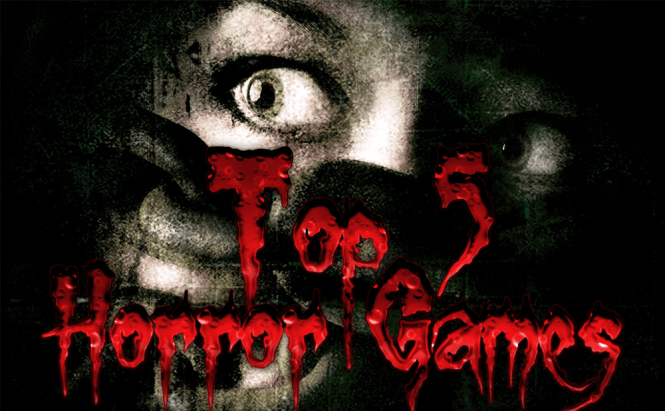 Fear is one of the strongest human emotions. It makes heroes and villains out of people, it is almost as strong as love and hatred, and it wakes up our most ancient primal instincts we wish we'd never experience. Yet, fear is also one of the most powerful drugs known to humanity, giving new depth to the way we perceive the world around us and showing us our own frailty more intensely than ever. This is what makes us play horror games again and again, and this is what has made me review the top 5 scariest games ever. In the protective darkness of our hiding places with abominable mosnters lurking outside, there is nothing left but our frightened breath and drumming heartbeat, telling us the naked truth of who we really are. So why not take the risk and embrace this dangerous knowledge?

The Clock Tower series is a slasher movie turned into a game. While this movie genre has been known as the worst yawning inducer since the early 1990s, Clock Tower was able to avoid the nastiest worn-out clichés – I presume largely thanks to its developer being Japanese.

The Japanese horror is considered as the major antagonist of the Western horror paradigm, with visceral action and gore being in the spotlight. The Asian horror is instead psychologically driven: it unfolds rather in your head than in the protagonists' bowels chopped to pieces by yet another psychopath. Staying true to this approach, Human Entertainment, a Japanese company closed in 1999, developed... a point-and-click horror game. Moreover, it developed a scary point-and-click horror game. Seriously.

Of course, solving puzzles can be scary for the most desperate housewives only. The horror element is presented in the game not by the puzzles: it reincarnates as the bloodthirsty Scissorman, a looney maniac with scissors almost as large as himself. This creepy screwball pursues you throughout the game, and each time he shows up the only way not to die is to hide from him or confront him in an open battle, hectically pounding the panic button in an attempt to escape.

This gameplay idea was extensively exploited in the three sequels, the first of which, known as simply Clock Tower in Europe and America and Clock Tower 2 in Japan, has become a cult classic on the Playstation platform. One of the most perverted (in the positive sense) games I have ever played.

Amnesia: The Dark Descent is one of these games everyone has heard about but hardly anyone has played, or at least hardly anyone has played them played to the end. The reasons are numerous: Amnesia is either too scary, or two boring, or both. However, the few lucky ones who have played it through will sure tell you with a trembling voice, mad sparkling eyes and their completely gray hair standing on end, that this is one of the best horror experiences they've ever had.

Amnesia is a spiritual successor of the Penumbra game series, a sullen zombie horror in an abandoned mine somewhere in the North of Greenland. The basic gameplay element in both Penumbra and Amnesia is the physics-based interaction with the player's environment, with the aim to solve numerous puzzles or avoid confrontation with enemies. However, unlike in Penumbra, escape is the only available option in Amnesia as you don't have any weapons at all.

The occult-themed plot is another lure for horror aficionados. The redemption and atonement of Daniel, the game's protagonist who got accidentally involved into a battle between two otherworldly creatures, is a nice metaphor for our own way of dealing with suppressed memories of our misdeeds and misbehaviors. I bet that most of the time people stopped playing Amnesia just because they were too disturbed by the images of their past the game called back to life in their heads. If you think the depressing atmosphere and ugly creatures craving for your death are not scary, then it is those pictures that show you where the real horror dwells.

3. Call of Cthulhu: Dark Corners of the Earth

This game was a financial disaster for the developer company, Headfirst Production, that went bankrupt after its release. What else did you expect if you made a game based on H.P. Lovecraft?

If you, like me, are a long-time fan of Lovecraft, who read The Shadow Over Innsmouth more often than the daily TV program, you will feel pure, unalloyed happiness when playing Call of Cthulhu. It doesn't even matter that Cthulhu himself never shows up. It's not important that Philip Howard would never think of J. Edgar Hoover as a character in one of his books. I don't care that Lovecraft would hardly approve of gunfire taking such a prominent place in a game based on his writings.

What matters, what is important, and what I care about, is the maddening atmosphere of unholiness, abnormality, and decay that shapes Call of Cthulhu. The 100% Lovecraftian feeling of something alien and hostile devouring the very tissue of our reality, the mind-boggling difficulty level, and the bitter hopelessness of your whole enterprise will beat any other horror game any time of the day. And of course the hotel escape sequence. The first time I played Call of Cthulhu, it took me two hours to finally escape the ill-fated Innsmouth, and all that time I was literally on the verge of wetting my pants. A blasphemous, unholy game. Iä! Shub-Niggurath!

It's common knowledge that Silent Hill 2 is the best part of the famous Japanese horror series. The non-trivial plot, fearsome monsters, which could be spawned only by a very (to put it mildly) unordinary mind, the brilliant soundtrack by Akira Yamaoka, and, of course, the Pyramidhead: who would dare say it is not enough to make up an ideal horror game?

I do. For me, Silent Hill 2 lacks the most important element of any survival horror: fear. Don't get me wrong, this game is epic. Silent Hill 2 is totally one of the best games that have ever been created by humans, and it's got a gorgeous story leaving any Hollywood horror junk in the dust with its eyes wide open and full of tears. Still, it is not nearly as scary as the first Silent Hill. Your first encounter with flesh dogs will definitely haunt you in your nightmares for weeks. These iconic nurse monsters are not as cute as in the later installments, and the only thought they arouse in your mind is: 'Oh my God oh sweet Lord Jesus why is this happening to me how the hell did I get to this place Mummy Mummy take me home I'm cold and hungry pleasepleaseplease.'

Silent Hill is so numbingly scary that you forgive Konami spine-crushingly stupid plot holes. For example, a policewoman who first tells Harry Mason, the game's main protagonist: 'I have no idea what is going on here,' only to warn him it's dangerous out there minutes later and, to crown it all, give him her gun (!!!). As stupid as this change of her mood is, the very moment you leave the cafeteria you've been talking to her in, you forget about this obvious idiocy: Cheryl, your 4-year-old daughter, is waiting for you in the fog of Silent Hill. There's only one question that keeps pulsating in your confused brain: 'Have you seen a little girl?'

The survival horror in its purest form. There is YOU, there is HIM, there is FEAR. Nothing else except for a dark wood and eight pages you have to collect.

Slender: The Eight Pages emerged as a half-joke, as a typically post-modernist wink at the modern Web fakelore. The Slender Man didn't exist before 2009, when it was created at the Something Awful forums by a guy called Victor Surge. The character gained some popularity, but it was clear that it was not the next big thing... until Parsec Productions released Slender: The Eight Pages. This minimalist game with a rudimentary story, primitive gameplay, and anything but great visuals became an instant hit with millions of downloads and a large fan following. The success was so overwhelming that Parsec Productions tried and developed a full-length Slender game , largely revolving around the same concept but multiplied by ten.

The key to this success is, as I've said above, the strict purism of Slender. This game is as uncompromising as only an indie game can be. It strips the gameplay of everything standing between you and your fear: HUD, plot, in-depth characterization. All of these things are useless when you get frightened. The pointlessness of the in-game situation, it's complete timelessness help us focus on what matters, on fear.

When adrenaline is delivered into your bloodstream, the external connections to your past life, to your personality, and your Ego are severed, they cease to exist. We all turn into a scared woman running through a wood from the faceless Slender Man, the personification of fear. Fear is anonymous, it doesn't have a face. Fear doesn't lie in the teeth of the monster attacking you from a bush. Fear can't be found in the bloodshot eyes of a psychopath approaching you with a knife in his hand. Fear is the strange stomping sound behind our back. You'll never tell if it is your own heart or the Slender Man coming.

Which of these games do you think is the scariest?
View results

Because 3d is always scary?

Amnesia is the best, it is 3D and it so scary!