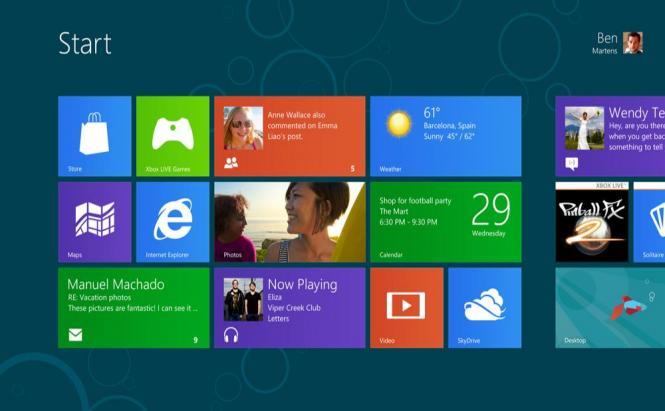 Microsoft has finally presented Windows 8 Consumer Preview on Mobile World Congress. The in-depth presentation of the Redmond's new OS by Stephen Sinofsky, Windows-department chief, was complemented with the download version of the product, made available on the Microsoft web-site.

The new Windows 8 Beta has brought about no surprises; its feature set is essentially the same as in the Developer Preview's version, published by Microsoft last October. The key word about the Consumer Preview could be 'refinement'. The features we already saw in the Developer Preview were substantially enhanced and made more understandable and, what's more important, easier to use.

So, for example, the touch-oriented Metro-style interface has been improved to correspond with the latest state-of-the-art trends in the touchscreen devices. Much of the control functions were shifted to the screen's edges, which are crucial for using the Metro UI. So, with a left swipe you get to the Start screen, the Metro counterpart of the Start menu. Dragging an app Title Bar close to a screen side edge will bring up a split screen, where the selected app will occupy about one third of the space. Another big change in the Metro navigation is the introduction of the Semantic Zoom. In the Consumer Preview, you can zoom out the screen with pinching gestures to get an overview of multiple tile groups ('tile' is term designated for the app icons in Windows 8). Each of these groups can be changed, moved, or given a specific name by the user.

These and other navigation enhancements have allowed Microsoft to make a revolutionary step in removing the iconic Start button from Windows. In practice, it is not removed altogether, being dissipated all over the interface. For example, in the Metro UI, there is a Start tile, redirecting to the home screen that the user sees directly after the log-in. Paradoxically enough, the 'oldschool' windows-and-icons interface has retained less traces of the Start button: after the first launch of the classical interface; it is rather jarring to find a gaping void instead of the Windows 7 Start orb. Its alternative, making the most sense in the Classical UI, is the Windows key on your keypad, having basically the same functions as the old button.

Another novelty about the keypad is that it is surprisingly the fastest way to navigate through both the Classical and Metro interfaces. For example, you can just start typing 'ar' while on the Start screen and the system will automatically search for all the apps containing these characters in their names. The other keypad features have remained completely intact or just slightly improved. So, the hotkeys are the same as in Windows 7 with some new Metro-specific hotkeys added (like Win+PrintScreen for making a screenshot, automatically saved in the designated picture folder).

Another important change is the transformation of Windows Live into Windows Account, which we have already briefly mentioned when discussing the Office 15 Consumer Preview. Actually, the revamped Windows Live/Account is the mightiest feature of the new OS. The new Mail, Calendar, and Photos applications are way sleeker and easier-to-use than their Windows 7 predecessors. Moreover, with the new SkyDrive options you can log-in your user profile on another machine and import most of your personal settings (from the Windows Store downloads to your wallpaper). Nevertheless, the awesomeness of the Windows Account features is to a certain extent counterbalanced by the fact that the user will almost certainly have to sign-up to Windows Account, like it or not. My personal favorite is the new picture log-in feature. Now the character sequence can be replaced with a user-selected picture, serving as the background. You enter the screen with that pic, make a series of touch gestures you defined beforehand, and voilà, you're logged-in! However, this trick isn't always played out right: sometimes the computer fails to recognize the gestures you're making. Most likely, it can be accounted for the hardware imperfection of the existing touch devices.

All in all, Windows 8 comes as a fresh and bold revamp of the Windows OS concept that Microsoft has been needing really bad since the XP times. Other than that, the new operating system is perhaps the first really good-looking OS by Microsoft that is notorious for the lameness of the visual side of its products. Whether Windows 8 is what the consumers really need, will become clear this fall, when the commercial version of the operating system will be available for purchase.

I will stay with Win7, because I cannot justify the money for Win8.
Will Win8 home basic still be unable to change the desktop wallpaper, because "that is a premium feature"?

Where is the beta for "Windows 8 on ARM"? The Ipad 3 is supposed to be released this week and MS has still not come up with a beta? What do you think will be purchased on the back-to-school-market and on christmas, not counting the other gift occasions until then?

1) Yeah, you can't change the wallpaper in th desktop mode, unles it is not one of the predefined color themes, and it kinda sucks (Microsoft explains it with significant difficulties the system would face when changing the wallpaper within an Metr-like interface);
2) There are no beta for Windows on ARM as of today (to my best knowledge).

The iconic Start button has been modified and now it looks indeed innovative and modern, but I'm going to miss the old one).
In general, I like the changes made. I've been looking towards something fresh for a long time. And it seems to me I'll be quite satisfied with the net result. By the way, I'm also fond of the new picture log-in feature.