The Internet has radically changed the lives of millions of people. For example, we have completely forgotten what it means to write letters by hand,... 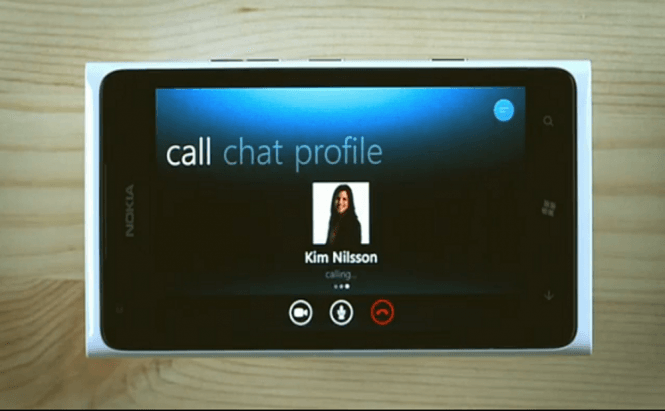 The Internet has radically changed the lives of millions of people. For example, we have completely forgotten what it means to write letters by hand, and then wait for months and weeks expecting a reply. Advanced technologies such as Skype have greatly simplified communication, shortening the entire process to a few seconds. Over the past decade, Skype has become an integral part of our lives, and for many of us it has become essential in all aspects of communication.

Skype is available on multiple platforms: Windows-based computers, Macs, and a number of mobile devices. Surprisingly enough, Skype has not had an official Windows Phone application until recently, despite Microsoft having acquired Skype over a year ago. The beta version of the app has been available for download since February 27; as for the stable release, the developers claim that it will be launched in April. The release highlights of Skype for Windows Phone

Einstein is often quoted as saying, "Simplicity is the purest form of geniusâ€. This idea seems very fitting for understanding the key to the success of Skype, which already boasts over 680 million users around the world. Let's see what benefits the new version brings to smartphone owners.

First of all, it allows you to do all the basic stuff that you love Skype for: you can make voice and video calls, write instant messages to people, and have group conversations â€“ these things are still in place. There is a basic set of tools to write messages including smiles. Even the notification system works the same way as on other supported platforms. The controls for video calls are pretty simple and resemble the interface we've got accustomed to, with only a few buttons for switching the camera and the speakerphone on/off, and a red button for terminating calls.

What is especially handy, you can turn the display off while talking and even scroll the page without interrupting the call.

However, the smartphone owners should only expect a basic set of features like video calling and instant messaging, nothing more. Developers endeavor to make users aware that this is still a beta version, and that it can be buggy. Even in some release preview videos we can notice several well-known bugs: video calls only working in landscape mode, or no ability to receive any calls when the app is not in the foreground.

What is more, you can send messages using 3G, 4G or WiFi connections. In addition, Skype developers have tested and certified the app for some popular devices, such as Nokia Lumia 710, Nokia Lumia 800, HTC Titan, HTC Radar, Samsung Focus S, Samsung Focus Flash.

Although you have to download the app manually at the moment, the developers claim it will come preinstalled on all Windows Phone devices in the foreseeable future.

Oh yes, Microsoft has a lot to do now so as to fix all the bugs. I've heard it cost the company about $8.56 billion in cash to acquire Skype. Of course, it'll pay its way but the question is whether users'll be satisfied with the not so high quality of the app or they'll look for something more reliable.

The question is: why mobile Skypes for all platforms except Windows Phone are so perfect?!

It's so much like a careless driver excedding the speed limit: you are in the comfort of your car and think you're driving at maximum 55 mph. Then, out of the blue, a traffic officer pops up at the roadside and stops you.
'Hey, you seem to be in a bit if a hurry, ain't ya?'
'Why, officer?'
'You were driving at 70 mph'
'Oh Jesus! I'm so sorry, I didn't think I was driving that fast!'
The same is right for Microsoft buying Skype: they are so much better at weighing up their pros and cons and optimize the use of the app in the best way possible when porting their software on the other platforms. As for Windows Phone, the Redmond crowd just fails to correctly detect what the possbile downside of this Skype could be (that goof with receiving calls only when in the foreground mode is just as huge as the Empire State Building).

Yeah, the very idea that you can't receive any calls when in the background mode makes Skype for Windowsphone nearly useless.

I can't believe Microsoft owns Skype. This is the buggiest Skype I've ever used. Who needs the app that cannot stay online when user returns to main screen (or swithes to another app)?! I.e. one cannot receive messages or calls. Btw, iPhone app had this featureof "minimizing" a year ago, and it worked perfectly even on 3GS. As for Microsoft, since beta version is available for download in the Marketplace worldwide, it might not contain such bugs, imo.

–  10 years ago  –  Was it helpful? yes | no (+2)
Useful Windows applications
Interesting Windows stories