Microsoft has launched a demo site that emulates Windows 10 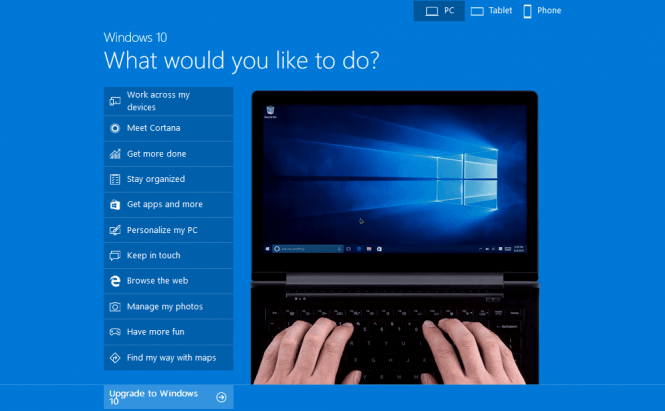 Microsoft has launched a demo site that emulates Windows 10

Despite the fact that Windows 10 has had the fastest adoption rate out of all the Windows versions, there are still many people who chose to stick with their former operating system and who aren't yet sold on Microsoft's latest operating system. This is why the company has recently launched a new online portal, which shows the users all the important features that they can get if they choose to purchase or upgrade to Windows 10.

The website lets you choose from a wide variety of Windows 10 functions and shows you videos, exemplifying how they work and how to use them. Since the website displays pre-recorded content and doesn't actually allow you to click your way around, it's not actually a Windows 10 emulator, but the idea is still pretty great. The visitors can see the way the features work on a PC, on a smartphone as well as on a tablet, so that they're covered no matter which product they're going to choose.

For those of you who already use Windows, but haven't yet upgraded to the latest version of the operating system, you should keep in mind that you only have a few more months to take advantage of the free upgrade offer. Furthermore, you should also know that Microsoft will soon launch a major Windows 10 update called the "Anniversary Update" which will bring a lot of interesting new functions.

If you're still having troubles deciding, you should check out our previous article "Is upgrading to Windows 10 worthwhile from your perspective?" as it may shed a bit more light on the situation.