How to Create Your Own Embroidery Patterns

For many centuries, needlework has remained one of the most popular human hobbies. Although there are many ready-made schemes and guidelines on the... 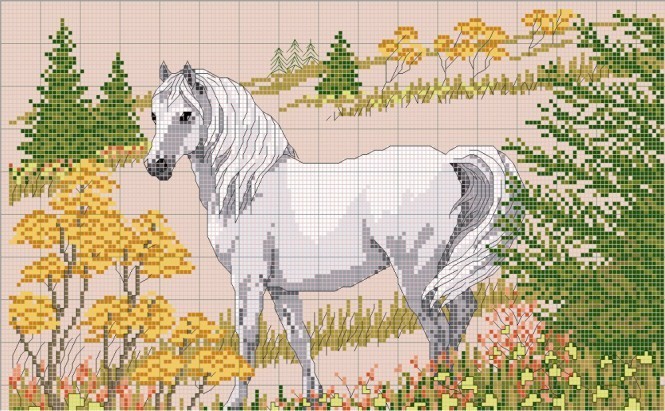 How to Create Your Own Embroidery Patterns

For many centuries, needlework has remained one of the most popular human hobbies. Although there are many ready-made schemes and guidelines on the Internet, there are some cases when you just need to make something unique. Suppose, for example, you want to embroider a portrait of your loved one, or your favorite painting: drawing up a diagram by hand would be just too much work. But there are many programs that are specifically designed for turning custom images into embroidery schemes.

It would seem that such software should allow us to quickly get straight to the handiwork part, the stitching itself. Unfortunately, that's often not the case, and there's usually a number of issues that come up along the way: the final chart comes out blurred, stretched, or the colors are all messed up. To create a pattern that would veritably reflect the original image, you should pay attention to three main factors: the pattern size, the number of colors, and the correct thread tones. Let's try manipulating a sample image in PCStitch and see how each factor comes into play.

The key point to understand is that the more stitches you make, the clearer your image will look; it's the basically same thing as resolution, really. So if, for example, you import a 500x500 picture and convert it into a 50x50 pattern, the output image will likely turn out disappointing: the pattern will lose most of the details of the original image. If you make the same image into a 250x250 pattern, it will be much closer to the original, but it will require much more needlework. In other words, to create a chart similar to your original photo, you should aim for the number of stitches equal or at least close to the number of pixels in the original image. However, if you can sacrifice some of the small details in the photo, you could really save yourself a month or two of stitching. Ultimately, it's all about balancing quality and effort. Sample pattern in 300x400 stitches, which is equal to the resolution of the original image. However, the resulting number of stitches is too large. Once you're finished resizing and playing with brightness and contrast, it is time to decide on the number of colors you'll use in your embroidery. The more colors you allocate, the closer to the original photo your pattern will look; but it also will require more stitching materials, and those don't come cheap.

Selecting threads might resemble, to some extent, picking a color palette for a painting. Although the program suggests what colors of the chosen type of thread you should use (respective thread codes can be viewed by hovering your mouse pointer over one of the symbols listed under the pattern), the real tones of those threads can turn out very different from what is shown, in which case you could try to convert your palette into another type by using the built-in converter. Unfortunately, you cannot change the palette type for already completed patterns in PCStitch: even if you convert your threads into another type, your pattern will keep displaying old palette codes. You could try editing your schema in this case, though: you will be able to change the color of any stitch, or modify the palette itself by adding, removing, or correcting thread codes.

I should note that most software pattern editors only allow conversions between widespread types of threads, such as DMC floss, Anchor cotton, etc. For those cases when you need to do some conversions into other palettes, you will need a specialized embroidery converter (these are sometimes called floss calculators). Oftentimes, one can be included in your pattern making software as an add-on - which is the case with Haftix calculator, for example. A good converter displays all possible differences in tones

Still, things are not as complicated as you might think; there are still some programs that let you create embroidery charts from images with minimum effort and without spending a penny. Like, for instance, Stitch Art Easy. It includes a handy wizard, which automatically configures the size (by default it makes it identical to the original image), suggests the best smoothing filter, as well as a number of colors. The resulting patterns look very nice and have very natural colors, so you don't have to do much editing afterward. The thread palette is also clearly presented, and the program finds every thread code automatically.

To sum it up, to get a decent embroidery design from an existing image you really need a good software guide, otherwise you'd be better off doing everything from scratch by hand. I personally don't have anything against additional tutorials, tips of the day, or editing every stitch of your pattern; but to make it all worth your while, see if the program you're using knows its thread codes and stitch types. And most of all, be sure to use something simple and efficient, something that doesn't take too much time out of the actual stitching.