Forget About Annoying Bundleware with Unchecky

The term "bundleware" refers to programs you accidentally install if you don't uncheck certain options during installation of some program. Here's how you can prevent it. 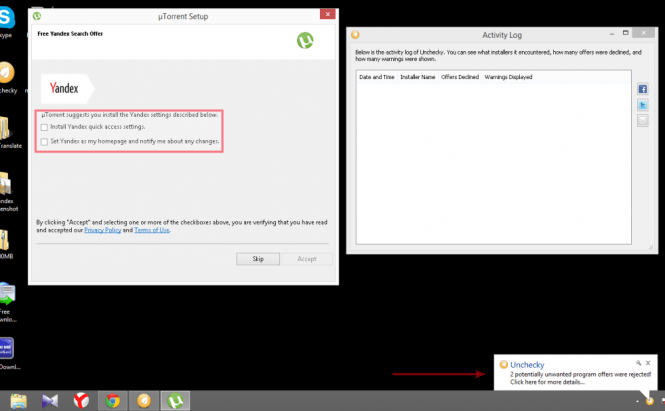 Forget About Annoying Bundleware with Unchecky

Windows users have to deal with bundleware, adware, homepage-changing malware, etc. almost on a regular basis. You know that's true if you've been working under Windows for as little as one year. Remember that time when you wanted to convert some video to watch it on your iPod later, googled to find a free program and ended up with three nonsense toolbars in your primary browser, a new homepage, and only one minute of an hour and a half movie converted. There is a very beautiful solution that can help you deal with bundleware automatically so that you don't accidentally agree to install something you don't actually need or want.

Bundleware refers to additional programs you install by accident if you don't uncheck certain options during installation of some third-party program. I have never seen anything that would relieve me from this headache, and I cannot express how pleased I was to find Unchecky. It is a free tool that you can download here. When it's installed, it will run in the background and whenever you launch a third-party installer, Unchecky will detect any garbage checkboxes that are set on "checked" by deafult and uncheck them for you. Besides that, whenever a third-party installer is not a conventional Windows installer, the program will warn you when you are about to install additional software that you may not want, thus giving you the possibility to fix it manually. It is extremely convenient, and I have not seen any issues or incorrect behavior during my testing. Here's a quick video of Unchecky in action: at first, some third-party installer is run without Unchecky, then Unchecky is installed, and then you'll see how it unchecks bundleware automatically.

Using this program is as easy as simply installing it once. If you for some reason are not satisfied with it, you will not experience any issues trying to uninstall it via the default Windows procedure (Control Panel -> Programs and Features -> Uninstall).

You also have an option to actually see how Unchecky helped you via its Activity Log feature. I'm going to say it again - Unchecky works perfectly, and if you combine it with the Software Informer desktop client, you'll automate the installing&updating software/getting rid of bundleware with just two programs. Seems like a great deal to me!

Do you know any alternatives to Unchecky?

Not really, no. But it's free and worked for me, so I wasn't looking for an alternative.