When I was in college, I had to write a paper about the Augmented Reality. I had no idea what it was, but the topic turned out to be quite... 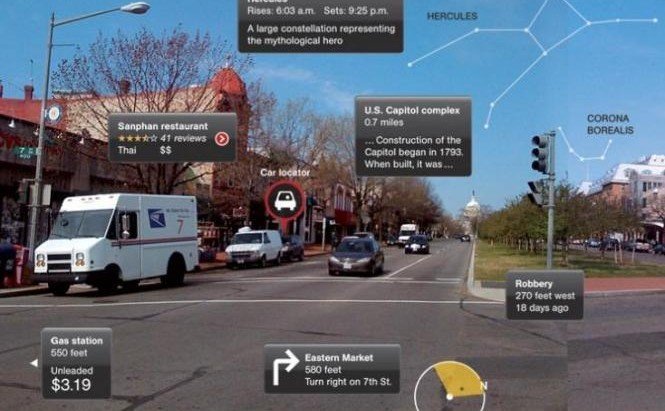 When I was in college, I had to write a paper about the Augmented Reality. I had no idea what it was, but the topic turned out to be quite interesting. In a nutshell, it is like virtual reality, but different. In virtual reality, you are wandering about a completely fake world drawn by a computer. While in augmented reality, as its name suggests, the real world is augmented with the information you need or may find useful.

Back when I was researching the topic for my paper, the Augmented Reality (AR) was incomplete, bulky, and not considered by most as something they should pay their attention to. And they were right. The technology of 2004 or 2005 (the year when I was working on my paper) was still a far stretch from what it should be to enable a coherent Augmented Reality. However, only 6 years later we find that our cellphones have more juice than some of the computers back then. And the first steps towards augmenting our reality have already been made. The progress reveals itself in the form of apps for your mobile devices and the additional information you see while in Google's Streetview, and many other ways.

Have you ever watched a game of American Football on the television? If you have, then you will remember the yellow yard line conveniently placed where the action takes place right there on the field. The line is so realistic, that it almost feels like it is real and moved by people right there on the field, but in reality, there is no yellow line on the field. The line is drawn by computers to aid the viewers' reality with additional, helpful, real-time game information. Sometimes it can as well be ads tidily blended in the scene.

We are on the verge of something great. Our computers can handle more than we ask of them. With every quarter, our computing devices are becoming faster, smaller, and more interactive. For a couple of decades, all interactions with computers were performed by means of a mouse, a keyboard, touch pads, and in rare cases by microphone. Now, you wouldn't even look at a device if it doesn't have a touch screen. But only 10 years ago, you would have rocked someone's socks off by showing him a touch-screen computing device (smartphone or pads). Similarly, a portable device with two tiny, high-resolution cameras were not even thought of as needed. But today, a device without a front and a back camera is practically useless. One camera always records your facial expressions, while the other camera takes the shots of your surroundings. A crisp image is displayed on a super high resolution touch screen, and your location is immediately tagged to the video or the picture using the GPS and/or Wi-Fi data on your mobile device. Later, you can see that location on an interactive map on your device or a desktop computer.

Imagine, you are visiting San Diego. This is your first time in the city and you know nothing about it. You wander around and you come across a large park. You remove your Pad from its sleeve, turn it on... A couple of finger taps - and the information about the park and its landmarks is displayed on the screen. In the same fashion as on the picture below, but better. 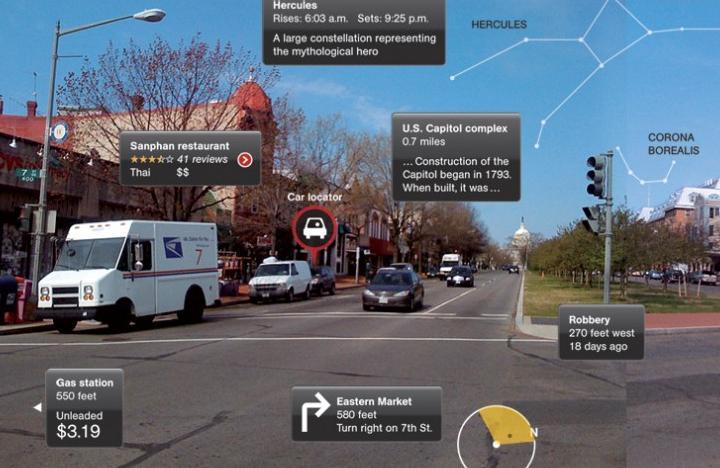 As you turn your Pad to the left or to the right, the information on different points of interest shows up on the screen. You will see specials from Evolution Fast Food or Extraordinary Desserts. You will eventually see that you are hanging out by Balboa Park and that you should check out San Diego's Zoo. A couple of finger taps, and you know your way there, just follow the directions drawn on the screen of your device, similar to the direction lines on your car's GPS device, but better.

In the Zoo, you found a creature you've never seen before. No problem there, just show that thing to your Pad and it will identify the poor skunk and warn you to keep out. Along, you will get the information about the animal â€“ it will be like reading an encyclopedia with videos, but better.

In short, Augmented Reality is the future. The modern tech allows us to avoid using bulky helmets attached to a battery that you have to drag around with you in a cart (yep, that was a prototype in 2005). The modern tech that allows us to obtain more information than ever before and more than we can handle fits in your jeans' back pocket. 4G cellular networks and cloud services on top of social network component will help Augmented Reality grow and prosper. Augmented Reality makes you truly mobile and armed with all sorts of information, both needed and spam.

While you can find various apps on your smartphones to augment your reality on the go, you can also check out the application listed on Software Informer. ARsight, developed by some Italian company, extends Google Earth to bring you the reality of the today's world technology. Check out landmarks right on your computer. And remember: AR is here to stay; AR is the future of new generations of Internet species.

Previous story Do you want to talk about it? Next story Increase your IQ score by up to 40%!

Thank you for this program.