Having generated copious amounts of sympathy among millions of users, Angry Birds continue to take over the world. In the latest update recently... 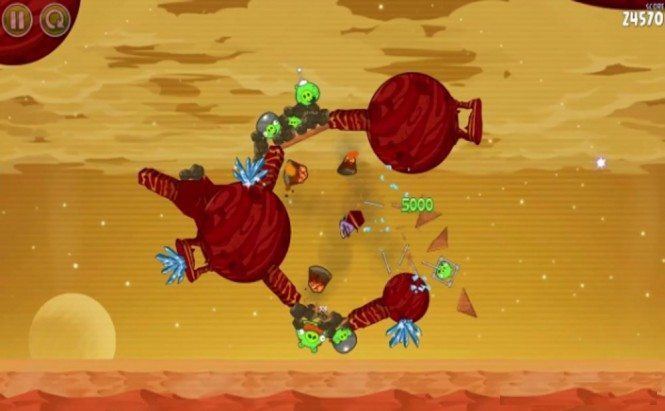 Having generated copious amounts of sympathy among millions of users, Angry Birds continue to take over the world. In the latest update recently announced by Rovio Entertainment, Red Planet, the Angry Birds go on a trip to Mars. Remarkably, the trailer to the game was created in collaboration with NASA: it is based on the imagery taken by the Curiosity rover from the planetâ€™s surface. David Weaver of NASA believes that such a video clip can serve not only entertainment, but also educational goals. For instance, the viewers can get a sense of microgravity from this footage:

â€œItâ€™s a great way to introduce both kids and adults to the wonders of the planet in a fun and entertaining way,â€ he said.

There are 20 new fiery levels the Red Planet update brings. Angry Birds will take players to a planet covered in erupting volcanoes and surrounded by exploding asteroids. There will be evil pigs crawling all around. It will be hard to escape this exotic environment, even for our brave and always cheerful birds. In addition, as the developers claim, there will be some hidden bonus levels available within the game.

What makes this game even more attractive for the wide public is that behind the scenes users will be able to proceed to the NASA web site and read more about Mars exploration as well as about some NASA missions represented in the game. The marketing specialists of Rovio Entertainment consider this kind of collaboration with NASA a thrilling experience. They are proud of their amazing demonstration of the physics engine used in Angry Birds, which was provided in March by NASA Flight Engineer Don Pettit. It was designed for the Angry Birds Space release and quickly caused it to surge to the top of the viral video charts of 2012.

The developers hope that this update will also win the hearts of many people. The game has already been released on Android and iOS and it will be coming to other platforms very soon.