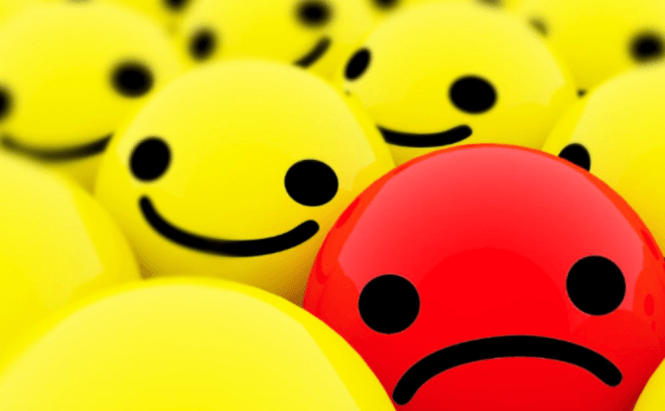 If you didn't get what this emoticon stands for, it's Santa Claus.

Christmas Day is over, the New Year too. This is the time when most people sum up which of their goals they have managed to achieve in the almost past year, and which ones are still to be reached. This is the time, when people look back at the way they have gone in the past twelve months, when they think about the events that have taken place in their lives since the last New Year, and try to summarize what emotions these events brought along.

Seeking for the way to express the emotions in the most concise way has always been one of the central problems people faced in the everyday life. The regular language is so inept and cumbersome that it poses a real challenge to convey the emotions we feel. This is where face expression and other non-linguistic communicative means come in handiest. It's infinitely easier to smile and thus let our counterpart know you don't mean some phrase serious than try to explain the same idea in plain words with a poker face on. It is way more convenient to give somebody a puzzled glance than indulge in verbose explanations why you are surprised at this or that phrase or action.

What is so paltry in the real face-to-face communication, becomes a daunting challenge when it comes to text-based communication media. Whereas on the phone people can impart their non-verbal messages through intonation, web-communication in the pre-VoIP (Voice over Internet Protocol) era was limited to character exchange between interlocutors. Not really much room for imagination, isn't it?

This essential drawback of the printed word had been a problem long before instant messaging became a topic. Vladimir Nabokov said in his 1969 interview, â€œI often think there should exist a special typographical sign for a smile â€” some sort of concave mark, a supine round bracket, which I would now like to trace in reply to your question.â€

On 19th September 1982 his dreams came true, as Scott Fahlman posted this message on the Carnegie Mellon University computer science general board:

â€œI propose that the following character sequence for joke markers:

Read it sideways. Actually, it is probably more economical to mark

things that are NOT jokes, given current trends. For this, use

In a couple of months this idea went viral, and thousands of people from across the then popular ARPANET and Usenet picked it up. Smileys - Express Your Emotions in a Concise Way

Today the Web without emoticons is unimaginable. They have become an integral part of the popular culture, being widely used in web-chatting, SMSing, advertising, etc. Demand creates supply, so it's no wonder there's a whole bunch of emoticon programs, which can help you enliven the habitual set of smileys.

Before delving into the vast massive of smiley programs, I have to give you a very serious warning: never ever try to get onto your machine an emoticon program that hasn't been checkfor viruses far and wide. Not that all manufacturers of smiley software are malicious data phisherswho dream day and night about getting your personal information. However, the vast majority of the freeware smiley programs are malware transmitting to another computer the keys you pressed while running some 'Prime Smiley Free Pack', so that the bad guys would know you passwords. That was the reason why we decided to find the best safe ans secure smiley software for you and review it. Let us begin with the applications lying on a more traditional side. Smileycons is a freeware program, allowing you to insert about 150 emoticons and about the same number of quotes into your e-mails or instant messenger client. The level of detail (if one can speak of such a thing as smileys' detail at all) is relatively high here, but to my mind the emoticons used in this program suffer from lack of charisma, looking rather generic and excessively positive. Surely, some positive is alright, but when it's over the top it can lead to some problems. Of course you know how confusing it can be when you're bringing down your wrath on the person you're angry with, and hear in response: 'Awww...' Crawler Smileys - Send an e-Card to Your Friends

Overcutilitis is in all likelihood an ailment all emoticon freeware has developed. At least, that was what jostled me away from Crawler Smileys. It is, essentially, another freebie giving you access to a vast collection of emoticons, but this time this collection is at least 7 times larger as that in Smileycons. The bad thing is that the sugar level in Crawler Smileys goes just off-scale. The day is at least partly saved by two another features of this program, namely by an even huger collection of e-cards, totalling more than 6,000 items, and the capability to send your friend a video.

Handy Animated Emoticons - Totally Nice Except for the Price

The excessive amounts of daintiness are definitely what Handy Animated Emoticons does away with. This shareware program has practically the same functionality as Smileycons and Crawler Smileys. The smileys available in this program are much more charismatic than the mawkish yellow impersonal cuties: if they are angry, they look really angry, if they are happy, they just look happy, not overjoyed. However, there's a huge problem with Handy Animated Emoticons â€“ its price. Of course, these smileys are cool, but I'm not sure there are many people around who are ready to fork out almost thirty dollars for 500 emoticons (which makes 6 cents per one emoticon). For God's sake, I am not ready to pay thirty dollars for a diary program, why should I be ready to do it for five hundred animated pictures? The last program I'd like to mention (but in no way the least one) is Emoticons Mail. Let's get directly to what distinguishes this piece of software from the other apps of its ilk, since its basic functionality is just the same as in Smileycons, Handy Animated Emoticons, or Crawler Smileys.

What strikes the eye, is that you can enhance your emoticon library by downloading new smiley packs from the Web. Nevertheless, this enhancement will cost you a pretty penny, because the full version of Emoticons Mail costs $33.44, and getting the expansion pack will increase this sum by over $21, resulting in the overall price of $55.34. I would not call this a bargain, if you ask my opinion. Taking into account the absence of any other noteworthy features (apart from the Japanese-styled Smileys â€“ I'm loving these!), purchasing this program seems like a wrong thing to do.

The next New Year is nigher and nigher, so it's high time we took stock of what emoticon programs are around. The results are quite disappointing: these are either ones infected with the virus of overcuteness, or those that are hopelessly overpriced. So far I have found no decent smiley software that would satisfy both the most exquisite communication monster tastes and the stingiest hearts.

However, if you have nothing against cuteness (tastes tend to differ, you know), then Smileycons or Crawler Smileys are definitely the programs that will make you happy :-)

Previous story Why Pay for Ringtones? Next story Challenging Puzzles in a New Way

Do you have the same problems as me? I mean, every time I try to joke on the Web without openly signaling about it, people don't get me. That just keeps annoying me,,,

Hm... let me think about it for a minute...
It is kind of sad that you have to state that you just joked! Either you consistently choose wrong audience or the other case.

To my mind, smileys is of great importance to make your interlocutor understand what you do mean at the moment. I think smileys save many hearts from misunderstanding

You know, the funny thing I have niticed is that when I crack some hilarious borderline joke on the Internets these days (modesty is not one of my virutes, that's for sure), but this joke has some, you know, unconventional communicative implication (in plain words, is about sex or some stupid national stereotypes), people take it for joke only when it is equipped with an emoticon. Otherwise my phrases get taken at face value and people start thinking I'm weird. That's a reflex, you know: a smiley ergo a joke; no smiley ergo a serious talk.

Thanks for nice words