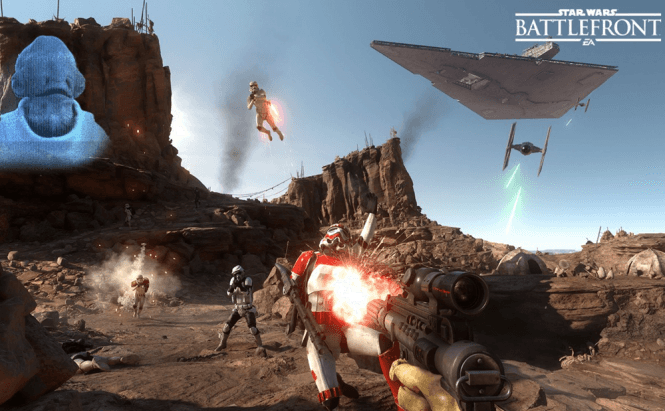 I don't know about you guys, but I'm pretty sure that I won't leave the house much this weekend as EA Games has recently made the Beta version of Star Wars Battlefront free to play. This means that everyone interested can go to the game's official website, download and play it without any restrictions (for the moment). I haven't had the pleasure of playing this game just yet, but my flatmate installed it last night on his Windows-powered laptop so I stood and watched for a time and I was blown away.

Let's start with the positive aspects: despite the fact that it's just a pre-release version, Star Wars Battlefront's graphics are breathtaking and the gameplay is spectacular which makes for one of the most immersive games currently on the market. This MMO game mimics the skirmishes between the Empire's and the Republic's armies, so most of the times it's total chaos, being very hard to figure out who's shooting and from where. There are ground battles, dog fights (in the air) and you can even play with famous characters such as Darth Vader or Boba Fett. Furthermore, in my short experience with the game, I've noticed surprisingly few bugs which is also an encouraging aspect. As far as drawbacks go, there are two big ones, and both are pretty much unavoidable. The first problem is that Star Wars Battlefront is made by EA Games which means you will probably need to sell a kidney in order to purchase it along with all its upcoming DLCs (if you pre-order, the game costs 70€ without any DLCs). And secondly, since the game has such amazing graphics its minimal requirements are quite high which means that you will need an ultra high-end PC in order to play it with all its details at max.

In case you want to "join the fight", you can download your own free-to-play version of Star Wars Battlefront Beta from its official website. (You will also need the Origin client).

Good news. I need to try it now.