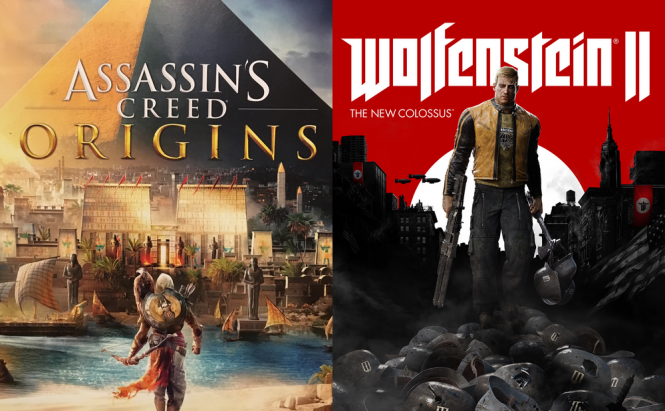 I've got some really good news for those who love video games: this Halloween you may be doing less trick or tricking and a lot more gaming as two highly popular games are set to arrive tomorrow, October 27th. Ubisoft will launch Assassin's Creed Origins, while Bethesda will release Wolfenstein II: The New Colossus.  Both games will be available on PC as well as Xbox One or PlayStation 4 and both of them will cost you $60 or €60, depending on where you are.

Assasin's Creed Origins is supposed to be a truly special game, which will shed some light on the beginning of the assassin brotherhood. I've read that the game's art directors have actually traveled to Egypt in an effort to make the game as realistic as possible and judging by how great the scenery looks, I'd say they've done a great job. Additionally, the RPG elements in this game will be stronger, with a better experience gaining system and weapons with different characteristics, while the combat system will rely more on dodging instead of the previous parry/hit timing system. There are many other new novelties, but you might enjoy discovering them on your own. In Wolfenstein II, BJ Blazkowicz is back in a Nazi-conquered America and he's just as murderous as ever be it on his own two feet or even in a wheelchair. Just like in the previous game of the series, the stealth approach will only take you so far and sooner or later each level will inevitably escalate into a very fast-paced full out war.

If the games seem a bit too expensive right now, you might want to wait for Steam's three upcoming sales and see if you can get a better deal for them.