Why Should You Use Open Office But More Likely Won't?!

Microsoft Office is not the best suit out there, and there are many alternatives, but we are less likely to use them. Whether you are a business... 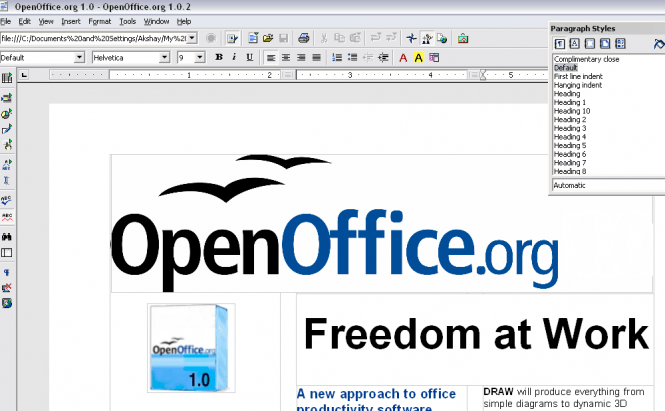 Why Should You Use Open Office But More Likely Won't?!

Microsoft Office is not the best suit out there, and there are many alternatives, but we are less likely to use them. Whether you are a business owner, a government official, or a regular computer user, the chances are, you are NOT using Open Office at work or home. What are the reasons people do not consider installing the free, effective (it works well), progressive (open source), and competitive alternative to the Microsoft Office?

1. Marketing campaign of the product sucks! Many people have heard about Microsoft products. It is because of the marketing campaigns the company is regularly spending big bucks for. There are commercials for Windows 7 on the television and on the Internet. In the past I saw a couple of TV ads for Office 10 and it was heavily advertized online as well. I am, yet, to see Sun Microsystems or Open Office Org. to put a couple of bucks into letting people know about their product. So far none, zip, nada, zero. Let people know, for Bill's sake!

2. Technical support myth. Some people believe that the developers of freeware avoid spending money on technical support. In other words: if something goes wrong then you won't find anybody to solve the issue for you. This is not entirely true. There is a lot of information out there for any product; companies and developers of freeware products rely more on customer's ability themselves to find the solution to a problem that was already (and more likely) solved versus having someone holding a customer's hand and walking through solving an issue. At the end of the day it all comes down to your choice whether to spend many dollars and hours on the phone with some "Jerome" in India or spend a few minutes Googling your problem and asking an online community a question, if you can't find your problem.

4. Graphical User Interface. Open Office looks like its design was last updated in 1996. In the second decade of the XXI century people expect everything to look like the things from Back to the Future, when they actually went into the Future, and not like being stuck in the same day as in Groundhog Day. In fact, if you ask me, I would choose Microsoft Office primarily because it looks cute, flashy, and NEW. I am not impressed by Open Office's GUI, even though it is functional, and I am sure many more people will jump on this band wagon full of my opinion.

5. Inconsistent look of the docs. The same document may look very different in Open Office's Writer and Microsoft's Word, that's a fact. I had it happen to me a couple of times and I strongly dislike it. On the other hand, my University had a contract for Microsoft products and all of our professors were using Microsoft Word. So I always had this fear: what if my .doc file created in Open Office would not open properly on my professor's computer? It's just so much easier to use the same program to create that would open to read those files. Open Document format should solve this problem (theoretically), but in reality, older and the new professors (established businesses) are not going to adopt this new format. It is just so much easier to walk already made path, than creating a new one! ODF is the future for computer nerds, everyone else will use .doc containers for years to come.

6. Multiplatform-ism. Microsoft's products are made for Windows and then for Mac. They do not need to worry to create the look that would fit 10 other operating systems. Hence, there is more time to make the program blend in with the operating system and invent new functionalities. While Open Office developers are tied down by working on a design that would work for all other operating systems (when the code is ported) to achieve interoperability.

My thought is that in the world of Microsoft and Apple domination, the great marketing move is to work on acquiring the user base versus making something interoperable. Somewhat the same goes for Linux developers. Rather than create endless number of forks for various distributions of Linux, all the developers could figure out a vote-based system to work on the same project and make this project able to compete with other PowerPC and x86's operating systems. Linux has been around longer than Windows (Windows as we know it today), yet it is less popular and is not made for an average user. I know because I used Linux for over 3 years of my life, and I had to learn to configure packages and so on. I say, make something good for one purpose and then fork it all the way you want!

Conclusion: Open Office (former StarOffice) has a lot to offer. It is quite stable and offers a lot of features, but the marketing campaign cannot be remotely compared with one of Microsoft Office nor any other competitor's same type of software (as they've got none) AND forking the development to make the suit interoperable is great but dubiously helpful for acquiring a solid user base. Of course, despite all of my words above, Open Office is becoming more popular and more governments adopt policies to use open source software in order to cut costs, but while the idea is great, will it work? Only time will show...

P.S. You might have additional thoughts or arguments against my points (please keep in mind I put down only those that stand out to me with my marketing background, there are many more points available inside my head, however) â€“ I would like to read your thoughts and arguments and I will do my best to comment on them.

Previous story Made by Google Next story From Raster to Vector