The DNA of music

What if you could 'fix' a specific dash of your brush after you've already painted the whole canvas? Sadly, it's a bit too early to be kicking down...

The DNA of music

What if you could 'fix' a specific dash of your brush after you've already painted the whole canvas?

Sadly, it's a bit too early to be kicking down easels with excitement; but musicians, on the other hand, they've already tasted the thrill. You see, a little while ago, Celemony Software, a German company most known for their range of 'Melodyne' products, announced a technology they aptly called 'DNA', which they said would allow musicians to do things they'd only timidly theoretised about theretofore. And it turned out, it really did.

'DNA' stands for 'direct note access' - which means that the computer can analyse a given recording, split it into individual notes, arrange those notes (along with their corresponding audio samples) on a grid similar to 'Piano Roll' views found in most DAWs, and allow you to alter any note without affecting any other part of the recording. You can change a note's pitch, length, timing, slides, character, etc. after the recording is already done. Novice singers all over the world, rejoice.

However, believe it or not, this is not what the real beauty of DNA is all about: there are heaps of other programs and plug-ins intended for fixing individual notes of a recording (if with mixed results as a rule, but that's beside the point), aimed specifically at working with vocal tracks and structured better for the purpose. What made tools like 'Melodyne Editor' stand out the minute DNA was announced was the claim that they could work with individual notes not only in solo recordings, but also in polyphonic music: within chords and multi-instrumental tracks. 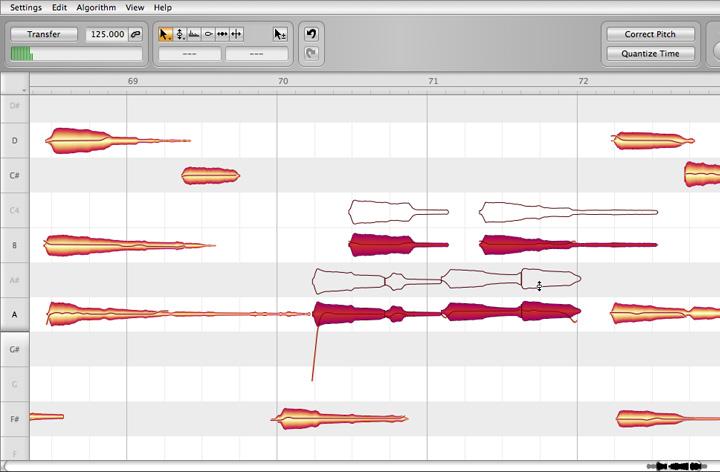 The ensued early beta access granted to all owners of any 'Melodyne' product showed that those weren't just words (if you've ever tried using a WAV-to-MIDI tool, you'll understand the scepticism): you would import a polyphonic recording into 'Melodyne', wait a bit, and then you'd get a 'piano roll' representation of the whole recording, where notes were replaced with audio samples - but not just cut out regions (with everything before and after the note left out), but rather cut out spectrums (leaving out everything not pertaining to the intended sound). Essentially, you get something that resembles the original MIDI material, fully editable even after the recording.

There are lots of official videos demonstrating the whole process and various tricks that could be done with the tools at your disposal (there is a particularly impressive video in which they import recorded guitar strumming and then change the pitch of just one note in each chord), but you'd be better off grabbing the trial version from Celemony's website and playing with 'Melodyne Editor' on your own. The technology is constantly evolving, providing more and more tools with more accurate control over each particular part of your sound over time, so have a look at what it's currently capable of and join the fun.