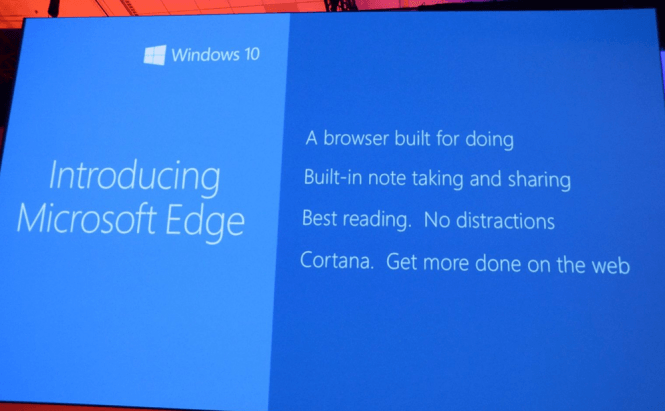 In a somewhat surprising marketing move, Microsoft decided to rename Project Spartan into Edge. According to the company, the rebranding is supposed to emphasize the fact that the product represents the cutting edge in productivity and consumption but it may also have something to do with the browser's rendering engine which has the same name. The announcement was made yesterday during the Build Conference 2015.

According to the IT giant, Edge will be the new Windows default browser while Internet Explorer will remain available only as a Legacy option for compatibility issues (websites built for IE). The new browser will not only be faster and require fewer resources than the old one, but will also offer a few neat extra features which include embedded notation tools and a distraction-free reading mode. Furthermore, Edge also offers Cortana integration, which is undoubtedly one of the main selling points for Windows 10.

As far as I'm concerned, I believe this rebranding (and especially the new logo which you can see in the image to the right) is one of the company's first mistakes in regards to Windows 10. After trying very hard (and failing) to convince its customers that Internet Explorer isn't actually a terrible browser, Microsoft decided to finally give up and start fresh with a new product. However, the fact that Edge's logo is so similar to the one used by Internet Explorer, might trigger an instinctive negative reaction from its customers. However, considering that IE's logo is known throughout the entire world, it's easy to understand why they would choose to stay close to home.

It does not matter whether a cat is black or white, it is important to hunt mice!