Which one is better: Microsoft Surface or Apple's iPad? This question holds an enormous holywar-inducing potential. Megabytes of fierce debates and... 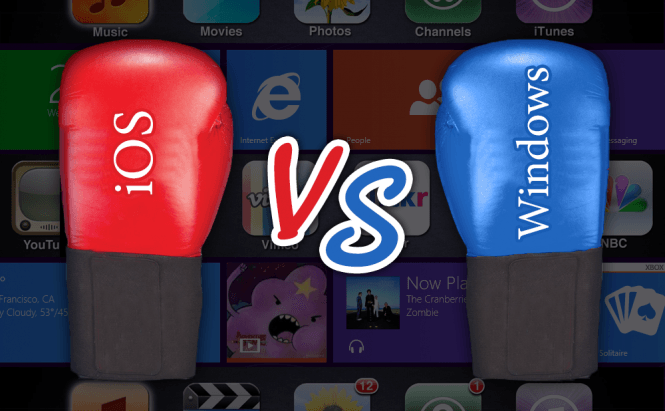 Which one is better: Microsoft Surface or Apple's iPad? This question holds an enormous holywar-inducing potential. Megabytes of fierce debates and years of videos are devoted to putting an end to this struggle; alas, it is still nowhere in sight. We have decided to try to resolve the dispute that drags on from time immemorial.

First, it should be said that the Surface vs iPad holywar is in fact a continuation of the IT industry founding drama over Microsoft and Apple struggling for the ultimate market supremacy. Its beginnings go back all the way to the mythical era of 1980s, with the Mac (Apple) and PC (Microsoft) platforms as the heavy weapons on the corporate battlefield.

After Apple lost the first round of the battle, it managed to pull off a triumphant comeback with the iDevices family, presenting the iPod in 2001, the iPhone in 2007 and finally the iPad in 2010. The latter became an instant sales hit, adding some yeast to the long-brewing talks about the end of the so-called PC era. Apparently, it was the iPad's success and the falling PC selling numbers that moved Microsoft to developing its first in-house tablet: Micrsoft Surface. The two IT juggernauts have clashed once again in the battle for hearts and wallets of users all over the globe. Both Surface and iPad are considered high-end tablet devices, which means that you shouldn't expect them to come cheap. The tablet-only 128 GB Surface Pro purchase will cost you the whooping $999 without providing you with 3G/4G connectivity. The 128 GB Retina iPad with the WiFi and mobile wireless support comes at $929. However, purchasing an iPad means signing a contract, i.e. paying the hidden costs in size of $359.76 (with the AT&T and Sprint's 250 MB monthly rate of $14.99) up to $1200 (with the 5GB monthly rate of $50). In other words, you'll either get a $999 Surface without the 3G/4G support or a $1,288.76 - $2,129 Retina iPad with the mobile wireless. However, you can circumvent the lack of 3G support on the Surface if you want by connecting it to your mobile phone set up as a WiFi hotspot. In that case, the Surface price increases by the price of your mobile phone and the mobile data plan you are using, but you will get the longed-for mobile wireless support, even if it comes in such a weird form. Reviewing the accessories pricing would be too mammoth a task, so we'll talk only about the covers. The so-called Touch cover was regarded as one of the killer selling points for Surface. It seems all the more surprising it doesn't come along with the Surface Pro version for free or even at a reduced cost. Strangely enough, if you choose to buy the more expensive Pro version, you'll have to fork out the full $119 price for the smart thingie. However, if you opt-in for the cheaper Surface RT, you have the chance to buy the Touch cover for $100. You can kill me but I don't get Microsoft's logic. Besides, I hate the Touch keypad, especially the unhandy Space bar feeling more like a Space pad. Apple's Smart Case is at least fairly priced at $49.00 for all iPad devices, regardless of their own price. Even if this price tags seems like a shameless rip-off to me, it still can boast consistency.

Syncing your iPad with a desktop computer involves using the much-hated iTunes media library app. In fact, the iPad devices are synced with iTunes, rather than the desktop itself, but as long as you are okay with it, it won't be that much of trouble. The problem is that the number of people loathing the botched-interface program by Apple is not that insignificant. I personally avoid using it at all costs: I just can't figure out how it works and where I should go to find the things I need. Moreover, syncing your Google email account with an iPad can be a rather challenging task for a novice user, even though it's not that hard if you previously gathered some experience with Apple devices.

Syncing Surface with your Windows-8-run desktop is a less demanding task if you use a Microsoft account for the system logon on both devices. However, this native sync support does not go beyond the system preferences and app settings, so if your want to share your Office files, media content etc. across your devices, you will need to set up a SkyDrive account. A free SkyDrive account allows for 7 GB of free cloud disk space, which is not that much if you are used to active sharing, but still it is way better than nothing. The SkyDrive pricing is exactly two times lower than that of Apple's iCloud, so using it sounds like a deal:

Even though lots of people are complaining that Widnows 8 (and Windows RT) has a too steep learning curve, I can't really get what is so bad about it. In fact, I believe the new Metro... I mean, the new Modern UI-based Windows is the best Microsoft OS ever â€“ but this opinion is not likely to be shared by the majority of the Windows 8 users. The only fly in the ointment is the inability of Windows RT to run the executable (.exe) files, i.e. to run most of the programs created for the traditional Windows. This shortcoming renders the desktop interface of Windows RT largely useless, with the only exception of pre-installed Microsoft Office being available there.

Albeit, when it comes to the mobile devices, the Microsoft OSs have little chance to compete with Apple's iOS. Let's draw the actual disk space balance. If you purchase the most expensive super-duper 128 GB Surface Pro, you will have only 89 GB of free disk space, the rest being occupied by the system files. If you choose to buy the 32 GB Surface Pro, get ready for the mighty 15 GB of free space for $499. That looks very unconvincing compared to iOS's 2-something GB of system files.

Windows 8 and iOS 6 Side By Side

Nevertheless, Microsoft has a very powerful trump up its sleeve: no matter what happens to Windows, it remains Windows. Surface Pro with its Windows 8 provides the user with significantly wider file managing opportunities than iOS. In fact, it is actually a fully fledged desktop operating system rather than a mere mobile counterpart. This makes Surface Pro to a portable workstation device, endowing it with exactly what the iPad is lacking so much: the use value beyond entertainment. Despite its enormous popularity, iPad has failed to finally replace the desktop and laptop computers as Apple's philosophy behind iOS doesn't leave the user much freedom in management and customization of the system. That is why you would hardly use the iPad at your workplace, whilst Surface Pro is defnitely a viable alternative for the traditional stationary computers.

It was our conscious decision not to consider the apps available for both devices: it is clear as day that the iPad will beat Surface in the number of software exclusives any time. Even without comparing the apps, one thing is absolutely clear: Surface has lost this battle. There is one user category where the Microsoft tablet can still lay claims to the leading positions, namely people who need tablets for professional use. Unfortunately, the majority of users don't need a $1000 replacement for their desktop, especially one with so many drawbacks as Surface. And as an entertainment device for novice users, the iPad can leave Surface in the dust without bothering shift into the second gear. So, unless you are a professional in a dire need of a desktop mobile replacement â€“ buy the iPad.

Microsoft and Android are the best!

Both devices offer price points from 400 to over 1000 dollars, so the consumer has a choice in the money to spend. Features, design, apps and operability make iPad the winner. Anytime a company races to market with a product made solely to have a product in that market place is ill conceived from the git go. Apple's product was born to run so to speak, where all others were born to match.

You're right Surface is losing, however, there's a weighty argument that leaves Microsoft afloat: iPad is unnecessary expensive