I Remember You as Phoenix

Have you ever met elderly people who would look at you patronizingly, pat you on the shoulder and say in a pathetic voice: “I remember you as a... 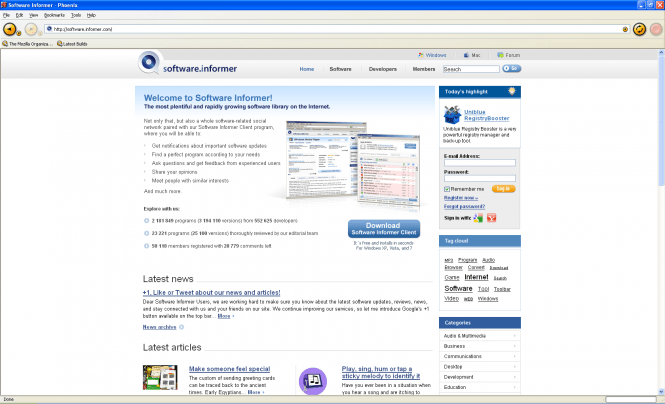 I Remember You as Phoenix

Have you ever met elderly people who would look at you patronizingly, pat you on the shoulder and say in a pathetic voice: â€œI remember you as a kid...â€

These words used to appear to me a bit haughty. Whenever I heard them, I felt my inferiority to these self-confident looking people: as though they wanted to let me know, by means of this sacramental phrase and ritual patting on my shoulder, that I'm still wet behind the ears. The way I used to react to these words was almost always the same: â€œDon't call me a greenhorn!â€

If only I knew how wrong I was! I think now it's high time I apologized to all the elderly people I trimmed thinking they were trying to make me feel small. Dear elderly people, now I see why you come up to the lad you once saw filching apples from your neighbor's garden and tell him you knew him as a kid.

I have realized my mistake. Mozilla helped me.

Wait, you don't get how Mozilla could do this? Okay then, let me explain.

In 2002, I accidentally laid my eyes on some new open-source web browser, called Phoenix. Well, actually it was nothing to write home about. Humble visual design, a limited set of features, and a name that could be easily confused with the products developed by Phoenix Technologies. Phoenix 0.1: The Legend is Born

By 2011, this browser had its name changed to Firefox and became the second largest browser in the world by the number of users. Its visual design is great, its set of features is awesome, and its name can hardly be confused with any other product in the IT industry. Moreover, Firefox is not a kid anymore: it's been a week already since its version 6.0 was released by Mozilla Inc. But it is not just one of those 'oh-new-Firefox' releases, it's a milestone in Mozilla's history: Firefox 6.0 is the last numbered version of the grown-up Phoenix. Never will Mozilla's creation proudly show its version number again. Until now, every major change in it was met with great fanfare and expressive winks by the developer, so the whole thing resembled a small kid's birthday party. In fact, the general cheer, sparked up by major Firefox pre-6 updates, had a greater scale than most birthday parties do: not every year saw this joyous event.

Now it's over. In reaction to Google Chrome's policy of short release cycles (15 versions in less than three years!), Mozilla has adopted a similar strategy. Firefox 5 was presented to the general public only thirteen weeks after Firefox 4 and was superseded by Version 6 in less than eight weeks. Versions 7, 8, 9 are already scheduled to be released with a six-week gap between them. So someone in Mozilla thought: 'Hey, if our users notice that we release new versions at such a galloping pace, they may get angry. Let's remove all these numbers from everywhere we can. 'From everywhere' means literally from everywhere, even from the About section. It looks like our girl has started hiding her age. Sheâ€™s grown up so fast!

Sheâ€™s much prettier than she used to be, but sheâ€™s learned to be cunning as well. Not so long ago, in Firefox 4, users first saw the so-called â€˜Do Not Trackâ€™ option, which, according to Mozilla, would make their browsing more secure. A single tick â€“ and you inform the web sites you visit that you do not want to be tracked by them. Sounds like it really helps you protect your privacy on the Web. Well, actually, thatâ€™s not completely so. Having opted in, you start informing the web sites you visit you donâ€™t want to be tracked, but thatâ€™s the only thing you really do. Itâ€™s still up to the web sites and their owners whether to track you or not. Moreover, if they go on tracking you, thereâ€™s nothing that can be done about it. â€˜You donâ€™t what us to track you anymore? Câ€™mon, we donâ€™t care!â€™ To my mind, the whole mumbo-jumbo around the â€˜Do Not Trackâ€™ option in version 5, where its relocation in the interface was presented as a major new feature of the build, can be explained quite easily. In fact, the difference between versions 4 and 5 is so tiny that it requires quite a lot of imagination not to regard the latter as version 4.1. Releasing version 5, Mozilla was in desperate need of anything that could be called a new feature, so as not to look awkward. And here came the â€˜Do Not trackâ€™ feature, which had already made a splash in version 4. Better than nothing. The IT-journalists are happy, since they have something to write about; and the users are at least soothed, because they donâ€™t feel fooled.

But thatâ€™s not the only thing that amazes me so much about the grown-up Firefoxâ€™s new release cycle. The other one is Mozillaâ€™s impatience. Version 7 is already available as a beta, and, according to various tests, it seems to have finally solved the problem which has been Firefoxâ€™s scourge for ages: its high memory usage. The results of these tests are incredible: the memory usage in Firefox 7 is going to decrease really drastically. Thatâ€™s cool, sure, butâ€¦ But why do we need version 6 then? I donâ€™t get it, honestly. We could have used Firefox 5 for another six weeks and we would have gotten this speedy, memory-sparing version. Instead, we have Firefox 6 with domain names highlighting (wow!) and a floating Awesome Bar (wow!!!). I wouldnâ€™t say it is an adequate response to Chromeâ€™s development fever. And I wouldnâ€™t say itâ€™s a clever and decent way to treat us, users.

I remember Firefox as a kid... Looking at the screenshots in my software family album, I am recollecting everything we went through together and shedding manâ€™s precious tears. I remember how the baby-browser got a new name after some copyright issues with Phoenix Technologies, how all these six major numbered releases were an exciting time. I saw this web-browser make its diapers dirty at the Phoenix stage. I saw it make its first steps at the Firebird stage, after it had changed its name. I saw it make a success of itself at the Firefox 1.0 stage. I saw it become a legend after the release of version 3. We have browsed tens of thousands of web-pages, we have downloaded gigabytes of pictures and terabytes of movies.

Reminds me so much of Ubuntu versus Microshaft - one has almost "built in" problems that might be resolved in the following 2 or 3 years (3 - 95 - 98 - (2000-nt -millenium)- XP -Vista -7) while the other one just improves with every edition but without any fuss and bother or fanfare OR COST!
Firefox is brill but, as you suggest, version 6 is better than version 4 by a huge 0.5% - come on Mozzies - get it right, make it the best, then put it on!