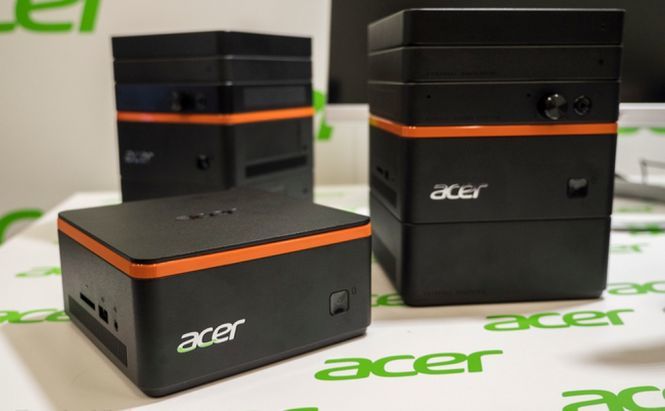 On September 02, 2015 Acer introduced a new PC called Revo Build M1-601. The peculiarity of its computer case is that it comes as a small core block that later can be successfully upgraded without any professional skills. Users only need to buy a preferable stackable block that can be added upon the unit like a Lego piece. The more blocks a user has, the more powerful and customized computer he or she gets.

While it all sounds like a great deal, the details of the Acer's offer make IT-observers less enthusiastic. At the moment, Acer provides only 5 blocks: a 500GB hard drive or a 1TB hard drive, a wireless charging dock, a speaker unit, a GPU, a projector, and a microphone. So, the manufactures do not present us with a good choice now and also say that the number of blocks can't exceed 5 because otherwise the computer case looks unattractive. Revo Build comes with a low-power Intel Pentium or Celeron chip and possesses 32GB storage and 8GB of RAM. Unfortunately, such characteristics may also have negative influence on product's popularity as they make this PC not a capable machine, but the base includes three USB 3.0 ports, an HDMI port, a DisplayPort, an SD card reader, and a headphone/microphone jack.

The new Acer's product is going to be launched in the USA, Europe and EMEA in October and in China in December, with prices starting at €199 and Y1,999 respectively.