The video games have one little drawback people often tend to oversee: they cost money. Sometimes, they cost a considerable money. And if we talk... 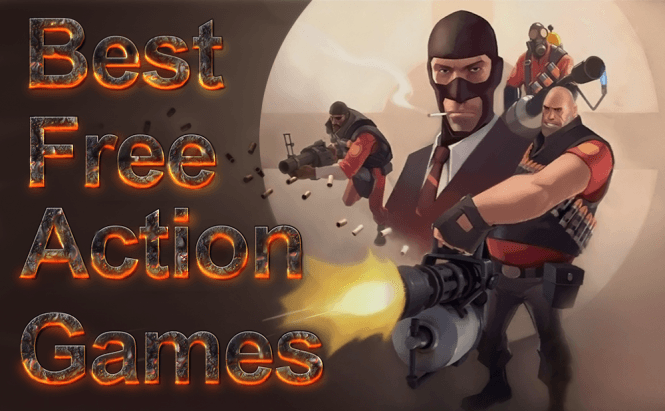 The video games have one little drawback people often tend to oversee: they cost money. Sometimes, they cost a considerable money. And if we talk about an action game, the chances are it costs a whole bunch of money. It's even truer the other way round: more than often, if an action game is free, it's total garbage. Moreover, your humble servant didn't feel like working today. That is why I decided to present you 10 best free action games for Windows.

This game was initially designed for Linux. I think it says it all. It is a game by nerds and for nerds, a tought nut for an outsider, and it's an enormous fun. If you manage to download and install it (which is quite a feat) and if you don't get shied away by the somewhat confusing controls, you'll be rewarded with a high-quality action parody of Dragon Ball Z. I've never seen a classier manga parody. This is a game hunreds of thousands of retro games fans have been dreaming about for years. I've never been much of a CS fan, but the never-ending battle between terrorists and counter-terrorists in 2D has won my heart: the world has hardly ever seen a more meticulous game downgrading. If you also are a crazy Half-Life addict like me, you can also check out this amateur mode, transforming CS 2D into a fully fledged Gordon Freeman game with zombies and Vortigaunts.

I know that many of you would love to see this game at the very top of our little chart. Unfortunately for you, TF2 is not on my faves' list. Not even close. However, it's not because the game is so bad: it's just me who is wrong here.

Talking facts, Team Fortress 2 has been perhaps the most successful multi-player game since Counter-Strike was released. The class system, cartoon-like graphics and a good pinch of black humor make it an all-time hit for so many gamers from all over the globe. And, what's even more important, the TF2 community is much friendlier than that around Counter-Strike. Well, to some extent. Okay, that's a controversial one. The game's childish graphics and general Jimmy Neutron atmosphere may shy away many people. But c'mon, it's the Bomberman universe! What can be better than a Bomberman game? Right, an online Bomberman game. Even if its characters look... somewhat uncool, to put it mildly, I can hardly think of anything bringing you more gratification than blowing up another box or two.

Movement and trickjumps. These two words, known to every devoted Quake 3 fan, are essential for understanding the Warsow gameplay. For those of you who are missing the cyber-action parcour, Warsow will be a perfect choice. However, I'd suggest training a little bit before venturing into the multiplayer game. Without a proper training, your most frequent question will almost certainly be, 'What killed me?' The second most frequent question will be, 'How on Earth did he do it?' Please keep it in mind before you try to show who's the Daddy in this cave.

I bet you've never died so quick in a video game. Seriously, the first time you launch a Nexuiz single-player mode, the average time of you being alive after encounter the enemy is approximately three to four seconds. These guys are nasty: they've barely appeared in your visual field when they start shooting around like there's no tomorrow, and then – chop-chop – you're dead. Even if you've was... I mean, spent a long time playing Quake 3, putting away a Nexuiz bot may be a challenge for you. However, if you think you're strong enough, you may put you reaction to the test: with a little practice they're not that powerful. Yep, it's Valve again. And you know, I believe it's just logical: the best free action games should be developed by the guys who create the best commercial action games.

Actually, this remake of a 2004 Unreal Tournament mod explores similar concepts as Left 4 Dead. Alien Swarm is a co-operative shooter with a campaign mode, where you have to fight off hordes of bloodthirsty aliens. In L4D it was zombies who we had to fight off, remember? The differences between the two include the sci-fi setting, the top-down view and a more morbid atmosphere. Oh, and the price of course: Alien Swarm comes for completely free.

Of course, I couldn't help mentioning this cult classic in this article. If you didn't happen to grow up in the late 90-s, you may have never played the first two parts of the legendary franchise by Rockstar Games. If it is so, then it is definitely an issue to fix: I personally spent far more time playing the first GTA than San Andreas. Even if you don't like the indie games (which is a great description of what the two first GTA feel like today), these two rampage chef-d'œuvres will be the best choice if you're having lots of free time to spend. Don't be afraid, my friends, I don't want to palm off a German-language game to you. It is actually Danish. And it is about World War I. World wars, Germans, you know, it is all somehow connected. And although the German language is present in the game menus, it is rather a stylistic device.

As for the game itself, I loved it. Your adversaries are not French or English as the game title suggests: you are fighting against huge mechanic dinosaurs. Okay, it may take a stretch to call it an 'action game' as most of the time you do not scathe these dinosaurs thousand by thousand with some kind of the good old BFG. What you are doing instead is looking for the ladder that will take you out of the unbearable war atmosphere and free you from the suffocating claustrophobia. And you know what? The action unfolding in your head in these moments is way more exciting than the most sophisticated and CPU-strangling AAA+ explosions. Which of these action titles would you like to play?
View results

What about Worms dude, Worms???

Oh I forgot you were mentioning only free games.

There's no beating Hedgewars in the Worms department.

I adore the sequence of Harry Potter's games

Cool. I like Bomb Buddies - the kind of 3D Bomberman =@