Just a bit over a year ago, in May 2010, a number of good-willing video game enthusiasts came forth with an experimental initiative: tired of the... 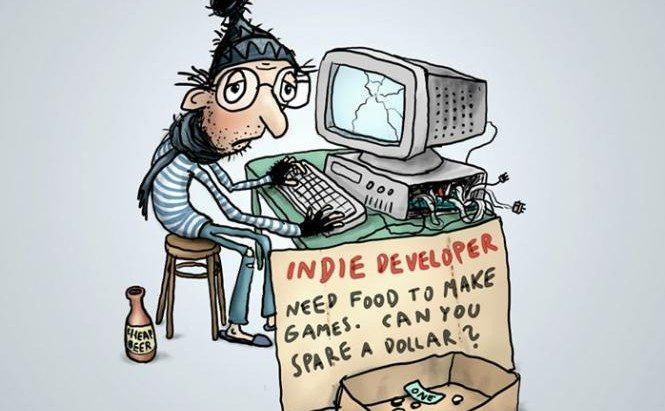 Just a bit over a year ago, in May 2010, a number of good-willing video game enthusiasts came forth with an experimental initiative: tired of the video games industry's general view of their consumers as malevolent counterfeiters that would happily see the whole industry go up in flames unless they are denied all possible rights upon purchase, the said enthusiasts (who also happen to be the chaps behind Wolfire Games) introduced 'Humble Indie Bundle' - a short-term deal offering a pack of five games, all created by independent developers (today's way of referring to yesteryear's bedroom coders), on a pay-what-you-want basis. Yes, as much as the total retail cost of included games was little short of $50 USD, these fine people believed that gamers were actually no less good-willing than they, and allowed each buyer to set their own price - to as little as 1 cent for the whole pack. And, despite the average price of purchase usually turning out to be as low as $6 by the end of the deal, all previous bundles were considered a big success - which apparently shows that gamers actually are good-willing. You even got a bonus picture if you paid less than $1; whyâ€™d anyone want to see it?

In addition, part of the proceeds was going to two charity organisations (the buyers themselves specified the relative amount): the Electronic Frontier Foundation and Child's Play - so the whole thing didn't look like someone was trying to make you pay at least a quid or two for some older games; no, it felt like you're doing a good thing. You imagined helping someone protect other people's rights and privacy, and helping someone else make the lives of sick children in hospitals a little bit more colourful - and you got a bunch of great games in the process. The more you decided to pay for the bundle, the fuzzier got the warm feeling inside, and the more fun it was to play those included games. It was marvellous.

Itâ€™s all about giving back

Feeling sad you've missed it already? No worries. On 26 July, 'Humble Indie Bundle #3' was launched, giving out another five meticulously chosen indie games on the same terms. Don't let the word 'indie' put you off, though: these games are no one-hour student exercises in 'Game Maker'; low-budget as they may be, they're actually a labour of love of a number of great artists - and, despite being exceptionally diverse in terms of style, they still are a feast for the eyes (and ears), incredibly fun to play, and, above all, boldly innovative. Let's have a quick rundown on what's on offer this time and see if the bundle is worth getting.

A quick hint: it is. A game where everything screams Commodore 64 - which renders its art style questionably attractive for those unfamiliar with the said old system. I myself fail to fathom how someone can resist the charm of all these two-way smiling faces.

Basically, 'VVVVVV' is a platformer in which you can't jump. It does have platforms - but the way you get from one onto another is by means of flipping the direction of gravity (which you can only do if you're standing on something; you cannot flip mid-jump). This allows you to fall upwards, ascend downwards, walk on ceilings, and do heaps of other nifty things. What it doesn't allow you to do, however, is, say, walk upstairs (whichever way that 'upstairs' currently is) without having to fall onto each step from some tiny spike-infested platform high above.

Which becomes a big problem when you get to this place: No, thereâ€™s no easy way of doing it

To get this shiny trinket on your right, you have to flip the gravity and make your way about five screens up along narrow spike-ridden corridors, land onto a small platform, and fall all the way back again to land next to the trinket. There's no two ways about it, it's devilishly difficult. And totally unnecessary (these trinkets just unlock some additional modes). Still, urged by instant respawns (thank heavens!), you keep dying and dying and trying and dying - all because you know that you'll finally love this game in about two hundred deaths or so.

There and back again What a cosy place

In 'Crayon Physics Deluxe', you're trying to make a red ball collect all the stars on each level; and the way you're doing this is by drawing shapes, which then come to life as ledges, ropes, wheels, weights, and other things - which sometimes form enormous machines, setting whole levels into motion. Thatâ€™s going to be an awesome one-liner

As the game itself puts it, it's not about finding a solution; it's about finding the most awesome one. You are encouraged to draw as few objects as possible (finding a so-called elegant solution implies that you draw as few as just one single line), which usually yields truly ridiculous and cumbersome shapes that slowly crawl across the whole level, nudging things and squishing other things. You won't believe how satisfying it feels when one of these monstrosities actually works and gets the ball to that one dodgy star.

What you may believe, however, is how relaxing the whole process actually is. Nudge a few more gears and pipes, and weâ€™re good to go

I abhor sliding-block puzzles as much as the next person, but when they're made so tangible and, above all, purposeful, I can almost finish about a dozen before remembering that I can't stand them. So thatâ€™s whoâ€™s been hiding inside all along

Yes, 'Cogs' is nothing else but a marathon of multifaceted sliding blocks puzzles of increasing complexity. The redeeming fact about it is that each puzzle is actually a whole mechanism, which is supposed to do something, but is now broken. You're free to rotate it in whichever way you like - learning more about its innards and trying to put its gears, pipes, bells, and other parts (which are what the sliding blocks actually are) in their right places. And when the whole thing comes to life, lifting up in the air, tick-tocking, or playing some music, and you see its inner workings moving - pipes powering gears powering bells and so on - and you realise that it was you who fixed it, sliding blocks seem to have been worth the trouble.

And Yet It Moves I must confess, I don't quite dig the graphical style of this one. Some say it reminds them of those diverse magazine cut-outs they used to make collages from, back in the day, and that it's actually very beautiful. One way or another, it's very functional - I'll give it that. At its heart, 'And Yet It Moves' is a reimagined version of 'VVVVVV', with a few notable novelties. First of all, now you can rotate gravity (by 90 degrees) in any direction, as opposed to just flipping it, and even do this whilst airborne; this allows you to walk on walls and traverse slopes with much more grace than Captain Viridian's upbeat hops and skips. Secondly, you can jump; and fall to your death, too. Most importantly, however, it's not only you whom your gravity tricks affect; all other objects in that world - stones, bats, water drops, what have you - also come into motion, and puzzles usually involve not only getting to a particular ledge (from a particular side of it), but also getting a bunch of other things to some other particular place in the process. Yes, sometimes, it's a truly mind-boggling experience. Okay, puzzles and platforms aside, it's time to smash some enemies and chew bubblegum (and we're all out of bubblegum). In 'Hammerfight', you're given a helicopter with some big sword or mace attached to it, menacingly swinging and rotating around you as you fly about. Your only means of controlling the helicopter is by moving the mouse, and your weapon just swings based on its inertia after you've changed your direction or stopped moving. There are no buttons involved (most of the time). Itâ€™s not all helicopters that youâ€™re fighting

Basically, it's a bit like wielding a mace or a hammer in real life: you move your helicopter (which is, all things considered, your in-game hand) to where you want to smite something, swing your weapon, and just watch your foe shatter into smithereens. It feels a bit clunky at times, but at least you're not risking a finger or two. I hope you're keeping the count, because 'Steel Storm' is actually #6 on our list of the five games on offer. Don't worry, there's no catch: Humble Bundles have been known for being keen on throwing in treats for good measure. There's just another bunch of enemies for you to destroy with a friend or three by your side.

'Steel Storm' is an old-schooley top-down shooter which truly shines when you've got someone alive to play with (or against). In this game, you control a hovercraft - in a way not much different from 'Quake' and the lot, albeit restricted to just two dimensions - and blast your way through hordes of enemies, destroying their turrets, cooling stations, and everything else that gets in your way. Narrow corridors, open sandy spaces and frozen planes, lots of varied weapons, responsive controls, fast-paced action, big bosses, even bigger explosions - ah, there's nothing like it after a lonesome hour of inventive crayon puzzles and 8-bit gravity flips made to jolly chiptunes. Out in the wild

So how do you actually jump on the fun train and help some charities along the way? Just head over to www.humblebundle.com and see whether you feel better paying $5 or $10 (it's more than $50 worth of games, remember?). For me, buying a bundle for $20 and then buying two more and gifting them seemed just the right thing to do.

And since we've got six more days to go, feel free to share your thoughts in the comments to help others make up their mind. Share and spread the fun!

Cheers for the heads-up. Incidentally, now they're also giving out the five games from HIB #2 to all those who pay more than the average price for the third bundle. (Or the lucky lot who've already purchased it, heh.)