Dear Globalization, why? Oh why... are you so mean and require that I know more than one language and understand more than one local culture?! You... 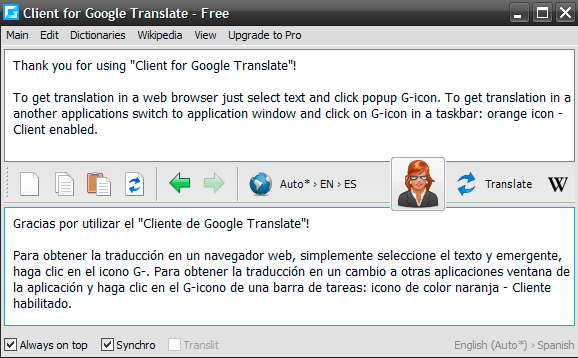 Dear Globalization, why? Oh why... are you so mean and require that I know more than one language and understand more than one local culture?! You are lucky I am into this kind of things and would gladly learn new customs and tongues, but what about other people, those who are not into internationalization? You say, there is an answer for them as well? What is it? What is it?...

The answer is tools offered by Google and additional information by Wikipedia. All that information and tools are only accessible through the Internet. So the Internet is a must, and it does not matter whether it is a slow dial-up or a fast fiber backbone. You will still be able to do basic stuff on any connection.

What do you need Wikipedia for? Well, there is a lot of information on cultures, languages, and economic situation in various countries. You should be using this resource to familiarize yourself with people from other regions. Please remember that there is some fake information on the site. So bear in mind this: what looks too good to be true is probably false. Use some search engines to check some of the information. Bing, Google, Yahoo are the top three search engines in the world. Maybe they can help you to figure out what's true and what is not. Also, you could be asking the natives whether some information seems correct to them or not. But to do that you will likely need to use their native language. Of course, if you do not know it, you are in deep trouble. But do not worry, Google will help you.

You've got to love the competition. Competition drives companies to invent and create services and sometimes to even make those services and inventions available to you absolutely free. Google is one of those companies. In order to be on top and receive ever more revenue from showing ads and featured websites, the company is obliged to keep its existing customers, while tapping into developing markets (with their customs, cultures, and so on) to attract new customers. Let's assume that people in the developing markets do not speak English well, but they are literate enough to read in their native tongue and they have a computer with an Internet connection. Would it be cool if they could read about the American freedom in their native tongue? Well Google can help with that. It can translate entire websites from many languages into many languages. And it does it pretty well.

I used to use Yahoo's Babel Fish for translations, but quite often the translated text was incorrect and since I am dealing with multiple languages on a daily basis, I got fed up choosing the correct languages from the drop-down list each time the languages needed to be switched. So a while back I moved to Google Translate, and I am satisfied with the service. Of course, once in a while it translates incorrectly, but it offers possible alternatives for each single word, which is awesome.

Since I believe that laziness is the seed of all progress (I mean think of it: if people hadn't been lazy to carry heavy bags on their backs, they wouldn't have invented a wheel or a carriage or made a horse pull it), I had to figure out how to cut down on the amount of clicks I had to make to translate some text. A text had to be selected, copied, a browser had to be opened, the Google translate link clicked, the text pasted, the right languages selected, and finally the â€œtranslateâ€ button pressed. Way too many actions for a simple translation. But I found a way to cut a half of them by finding Client for Google Translate. The program is a stand-alone application with a sole purpose of taking your input, transferring it to Google, and displaying the output from Google's translation services. Regardless of what exactly it does, I know does all the work and I'm happy with that. 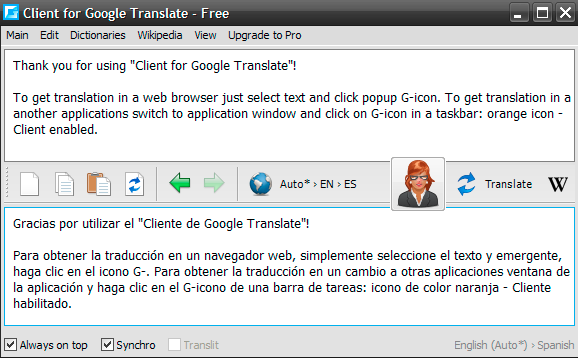 So in short, the program allows you to skip opening the browser. Just copy a text into the program's appropriate field and get it translated. You can set a keyboard shortcut so that selected text is automatically translated with even less key strokes than ever before. This is a pretty sweet deal, I must say. Well, I am not going to tell you how cool this program is and what it does, as you can check out its review on Software Informer's website: Client for Google Translate. Notice how more than five thousand people are using it, so it must be good!

So let this program be your second step in understanding your foreign partners and acquaintances. There are some Google Translate phone applications, some with voice recognition features, so your phones can translate spoken languages back and forth. You should check it out as well. All of those tools will definitely help you.