Windows 10 Lets You Flip Off People Who Annoy You 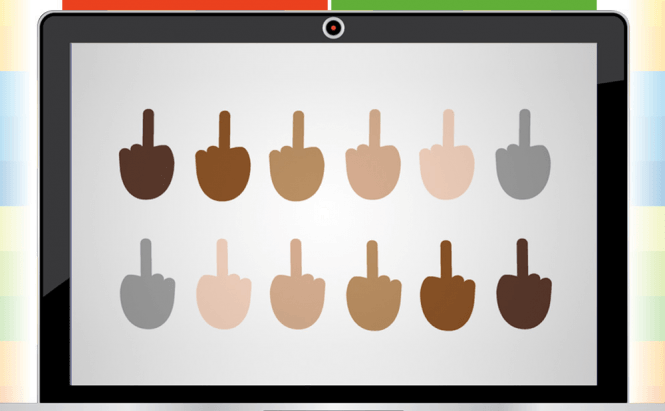 Windows 10 Lets You Flip Off People Who Annoy You

There's nothing better than being able to express exactly what you feel, but sometimes that can be a bit hard in the virtual world. In my opinion, most of the big IT companies are suffering from an exaggerated bashfulness, especially when it comes to things that are a pretty common part of our day to day lives. Don't get me wrong, I understand that some people get offended easily and make a big fuss out of it, but I don't think hiding behind one's finger is a good solution. Microsoft is the first large company to break free of this mold and introduce the middle finger emoji into Windows 10, its upcoming operating system.

Unfortunately, since this emoticon is only supported by Windows 10, this means that if you send it to a person who is using an iOS, Android or Mac powered device, they will not be able to see it. This new emoji will let you express your (vehement) opinion in six different skin tone colors which range from pale white to a grayish tone which is designed to take the "human factor" out of the gesture. Unfortunately, if you're from a Commonwealth country, the two fingers (reversed victory) sign which you are probably more familiar with is not yet available.

What I found to be really funny was Microsoft's attempt at being educative when it came to explaining this emoji. If you check out their Emojipedia blog and click on the middle finger emoji link, you will find out that this sign is "used in Western cultures as a rude or insulting gesture. The back of the hand is shown with the middle finger raised." Now, all we need is a 'Dislike' button on Facebook and our Internet lives will become much more interesting.