Please wait… it’s not over yet When someone complains about the ever-increasing loading times in modern games, a ZX Spectrum dies in someone else's... 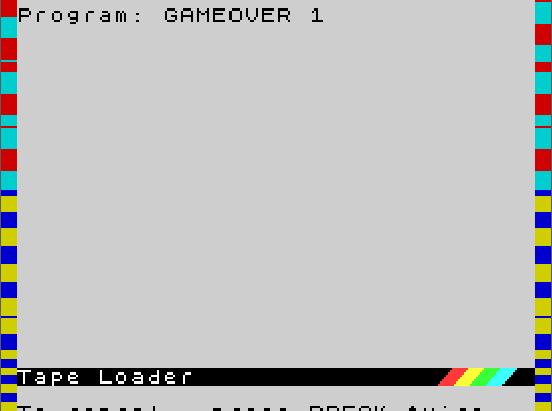 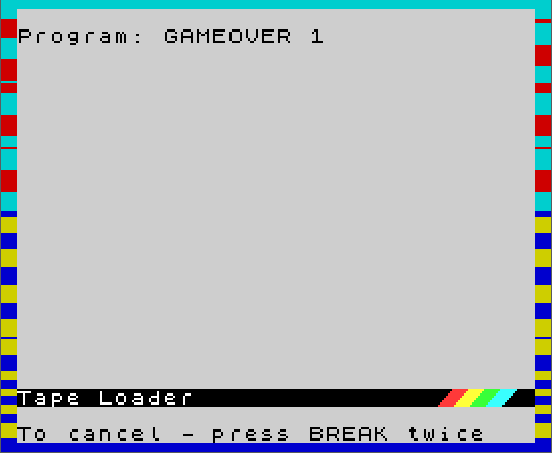 Please waitâ€¦ itâ€™s not over yet

When someone complains about the ever-increasing loading times in modern games, a ZX Spectrum dies in someone else's attic. You know, those stylish black rubber-keyboard PCs that were the centre of everyone's indoor universe back in the mid-80s. You pick a cassette tape with some vague title like 'Game Over' (its cover image unmistakably suggesting that there's some thrilling entertainment in store), type in the magical Load "", and start hoping. 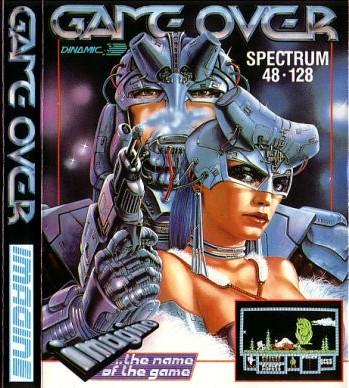 With cover art like this, itâ€™s bound to beâ€¦ something

The room fills with screeching noise and flashes of blue and yellow, and you crank up the volume, feeling terribly determined to let no tape error prevent you from finally playing this tempting-looking game this time, and the on-screen loader teases you with a pretty picture...

And then the cage comes down. 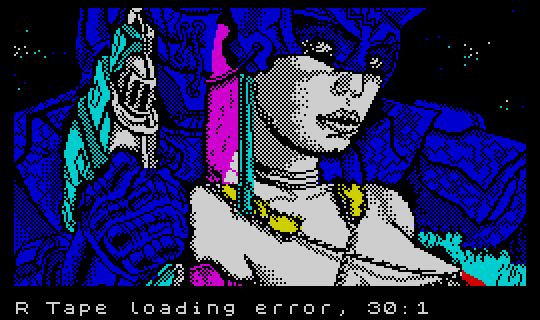 Now, while you're waiting for your fancy new Lineage XIV to stop loading (and/or stop playing itself), how about we pay the good old Speccy another visit and enjoy those hundreds of classics without having to watch the TV with earplugs on in between switching the cassette tapes? All it takes now is downloading a ZX Spectrum emulator; let's pick one. 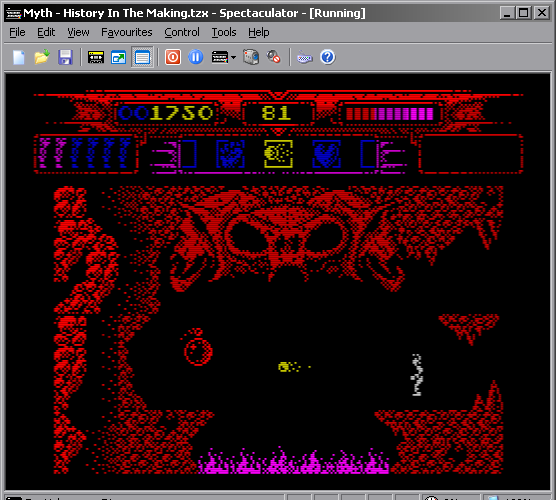 There's little I can say in addition to what I previously wrote in my review of Spectaculator (you can use the link in the header to read it). I believe it's ever refused to play just a couple of games: ATV Simulator (which came on a 5.25'' diskette and required TR-DOS to run) and some quaint Russian 'sequel' to Dizzy. Other than that, it was a joy to use: its settings were all in the right places, loading a game was as easy as opening a file, recording replays was straightforward - everything went swimmingly until Spectaculator's trial period ran out. Yep, unless you're willing to fork out $30 USD (which is, admittedly, a reasonable price considering the quality of the application), your search is not over yet. 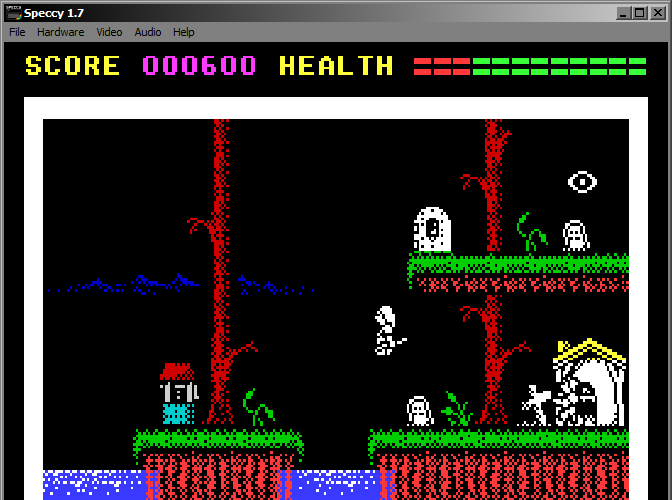 Here's a freebie, which you can probably guess by the program's austere looks. What you can't tell from its looks, however, is that it's actually quite a potent piece of software: it emulates tons of various hardware (not only in terms of obscure input devices, but also Speccies themselves, up to Pentagon and Scorpion 256k), it supports freehand scaling (you just resize the window as you want, and the picture scales accordingly; and there are preset sizes in case you should mess up), it can simulate TV scanlines, and record in-game melodies to MIDI files (yes, there's no need to transcribe them). But, as it's wont to be with freebies, these things come at a price.

This emulator is quite fiddly to use, you see. Suppose you want to play a game saved as a TAP file (a cassette image). You press 'File', select 'Open', pick your TAP file... and nothing happens. What you do next, is dust off your rusty Speccy skills, press Enter to access the 'Tape Loader', type in the tear-jerking Load "", and press Enter again. That's all, surely? Not quite. Then you press F4 to start the virtual tape recorder, which then starts loading your game as if you were running a real Speccy - that is, with the frightening prospect of having to spend several minutes staring into the mesmerising kaleidoscope of yellow and blue stripes before your game finally loads. There's a solution, however. You just press F9 to speed up the emulation, and thus reduce the loading time to measly five seconds. Here's the thing, though: you have to hold F9 up until Speccy is done loading the game. Intuitive, isn't it? I thought not.

There are a couple more hiccups you may have. First off, Speccy refused to run the same Dizzy game (incidentally, it's Dizzy Underground) which brought Spectaculator to its knees - so there's no telling if you won't discover that your childhood favourite just stalls at the loading screen. Secondly, you may notice that the colours are somewhat faded, which makes the games look a bit bleached; thankfully, this can be easily fixed by opening the 'Video' menu and picking the 'RealSpectrum' colours instead of the default palette (why this isn't the default setting is beyond me). Thirdly, you may have difficulty accessing menu items other than the 'Tape Loader' - the trick is, you don't just use your cursor keys to select that elusive 'TR-DOS' item, you need to hold down Shift as well. Oh, and this program doesn't support RZX (replays) recording. Still, other than all that, it's a perfectly sound alternative to Spectaculator. 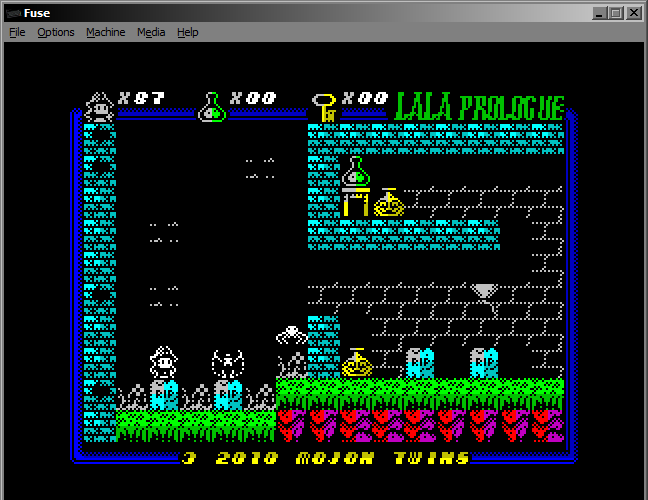 This one doesn't require you to hold any obscure buttons while your game is loading - that's a start. It's even capable of figuring out that it's supposed to load the game after you open a TAP file - that's civilisation for you. Fuse can emulate the whole range of Spectrums, too, Pentagons and Scorpions ZS included. It's also one of the only two ZX Spectrum emulators that I've managed to run that shady Dizzy Underground game on, if with a bit of fiddling and switching from Scorpion 256k to Pentagon 128k and back.

What else is there about Fuse? Well, it only supports a number of fixed screen sizes (with a fixed aspect ratio) - so when you resize its window the contents just 'jump' to the nearest preset size. Has occasional hiccups with TAP files (it sometimes returned a 'not enough data in buffer' error when I tried loading the Elven Warrior tape). Can record RZX replays (with rollback and championship support - that is, with or without using save states). A bit confusing in terms of menu navigation. Has an overblown status bar which is actually pretty useless (can be disabled). Has a black border on the screen edges (cannot be disabled). Well, that's all, really. 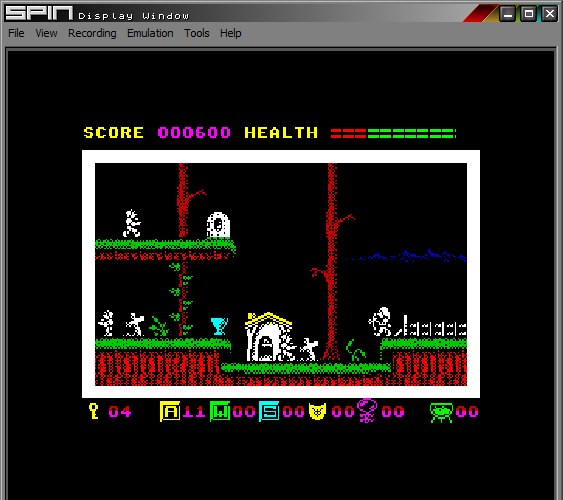 Look, it has the rainbow on it!

ZX Spin is the other one of the said two emulators that could run Dizzy Underground (I hope you'll forgive me for using that lovely character as a benchmark test). There isn't much to ZX Spin, however. It is no longer being developed, its latest stable version being 0.666 (or 0.7, if you count development builds); so there's no one for you to send bug reports to when it crashes. And crash it does, quite often even, especially on loading games. It also lets out a terribly loud click whenever you reboot the virtual Spectrum in it (something that real Speccies did too, admittedly, but also something we could easily go without); however, it can also be muted with just one click: there's a rather nifty set of buttons right under the main screen. All in all, if you manage to hunt it down, do download it: it may pretty much turn out the only emulator that runs your old-time favourite.

It all depends on which game it happens to be, I suppose.

Previous story Programs For Ripping Your DVD Collection Next story “Where flowers bloom...”

'Your actions have damned Vinnie!' )
It's astonishing how there's still people making quality games for the good old Speccy. You've got to respect Mojo Twins with their Lala Prologues (I see you're familiar with this one) and Sir Ababols, RetroWorks with their KingsValleys and Teodoros, Little Shop of Pixels with their Gloop Troops and Crimbos... Those lads are fab.

Incidentally, is there any way to get hold of that 'elusive' Dizzy Underground, or the Codies are preventing its distribution (like they do with original Dizzy games)?

Aye, even though the majority of Mojon Twins' games seem like re-skinned versions of one another, they're still a joy to play.

Dizzy Underground is one of the few Dizzy games available for free downloading on WorldOfSpectrum (which probably means it's legal to download it in general). Just head over to WoS and you're set! Feel free to drop me a message if it starts acting up for you.

Cheers, mate. Off for some Dizzy fun I go. )

No bother at all.
By the way, I should've probably noted that Dizzy Underground is in Russian - but don't let that put you off, it's all pretty visual and straightforward. Yay to graphics!