RoomAlive Turns Your Room Into a Whole New World 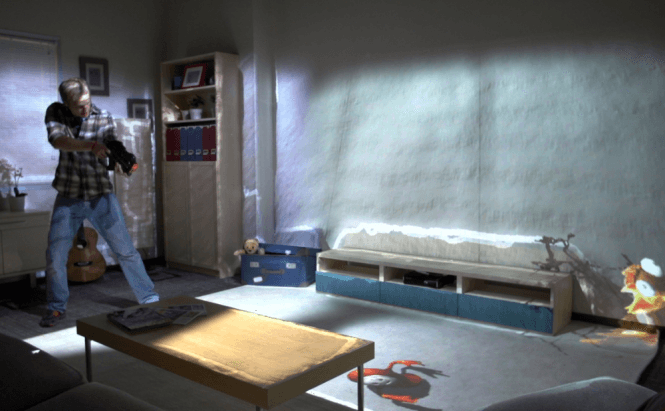 RoomAlive Turns Your Room Into a Whole New World

I think that every gamer on the planet was excited when we first found out about Microsoft's IlumiRoom project. I mean, just imagine completely removing the screen and using the Kinect sensor to transform your entire room into a playing field. Sadly, it turned out to be just a proof-of-concept research which didn't become a part of the Xbox One as the company deemed the required technology too expensive for a home gaming console.

The good news is that the IT giant didn't stop working on the project, and now we get to see a demo of the prototype currently called RoomAlive. The device uses a Kinect sensor and several projectors to map your entire room and then turns every surface in your living quarters into an awesome entertainment experience.

RoomAlive's mapping and projection system allows developers to create games without taking into account the particularities of each room. All the projected content is automatically adapted in real-time to the colors and the geometry of the respective living space.

Though I believe that the concept is absolutely amazing, I still have a hard time believing that I will actually get to play with one of these things in the upcoming years. In my opinion, the chances that this kind of technology will become affordable enough to masses any time soon are pretty slim.

However, if this RoomAlive actually becomes a product cheap enough for the general population, I will finally get a chance to understand my cat's fascination with chasing laser pointers on the walls and floor.