With so many devices that we use on a daily basis, it's hard to imagine we could ever do without cloud storage. Backing up data, sharing documents... 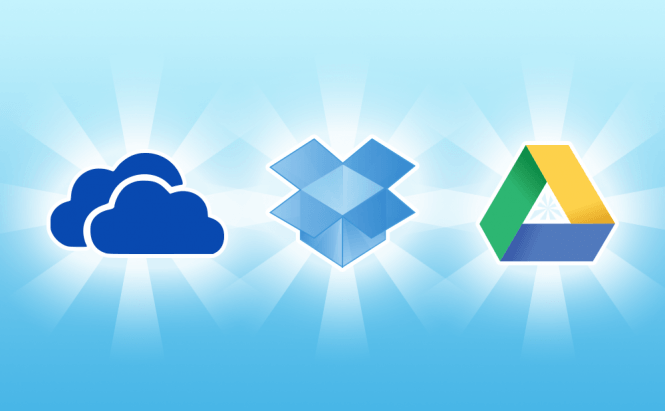 With so many devices that we use on a daily basis, it's hard to imagine we could ever do without cloud storage. Backing up data, sharing documents, or having access to all your important files everywhere now seems only natural. And with a broad variety of cloud storage options trying to entice potential users by offering more and more free space, cross-platform compatibility, and fancy standout features, it's become incredibly hard to choose between them. In this article I'd like to focus your attention on three most well-known cloud storage options on the market.

Dropbox is one of the most popular and oldest cloud services. Although it provides you with only 2GB of initial free cloud storage it's not so hard to get some free extra space, up to 18GB, by referring friends and doing some other things (like uploading photos from mobile devices). Besides, it's available on pretty much every platform, even Linux and BlackBerry. One of its key points is its extremely easy-to-use interface. One of its unique features is automatic camera uploading: it automatically saves all the videos and photos you've taken with your smartphone or tablet to the cloud in their original size. However, if you decide to purchase additional storage, you may find the pricing plans rather costly, as additional free space starts at $99 per year for 100 GB. If you often work with documents, there's yet another thing that might disappoint you in Dropbox: it doesn't have any kind of an online document editor, which means that you will have to download files to edit them locally.

Like everything else Google creates, Google Drive was bound to immediately become one of the best choices on the market of cloud storages. Many preferred it just because they were already using many other products created by Google and it made perfect sense to stay in the same ecosystem. The Google Docs and Gmail integration is extremely useful and is one of its key advantages. With Google Drive you get 5GB of available free space from the get-go, but unfortunately it doesn't use any referrals or offer any other ways to get additional free space. However, the cost for commercial use seems reasonable enough â€“ for example, additional 100GB will come in at $4.99 per month, which is about twice as cheap as the same storage pricing plan offered by Dropbox. As for the downsides, one of the main things heavily criticized concerning Google Drive is the privacy policy in regard to the content uploaded to its services; but this uneasiness over privacy can apparently be applied to almost any Google product so it is rather a question of trusting Google enough to use its products at all.

SkyDrive comes with Windows 8 and tightly integrates with Office 2013, so it is obviously a perfect choice if you constantly work with Microsoft Word or Excel. SkyDrive offers 7GB of free cloud space initially, which is a rather generous offering compared to Dropbox and Google Drive. The pricing for its paid upgrades might please you as well, as its additional 100GB of storage come at $50 per year, the lowest price among the three options. While Google Drive and Dropbox let you choose which files to sync to the cloud service, the SkyDrive desktop application also allows you to access all the files stored on the hard drive of your remote PC. However, in comparison to Dropbox and Google Drive, SkyDrive imposes the most strict uploads limitations: 2GB through the desktop application and 300MB through the website. Apparently, all three services have their own pros and cons, but the main aspect that you should consider when you choose among them is the purpose of using one. Dropbox is great for working with multimedia files and synchronizing across various operating systems and mobile devices. Google Drive is famous for excellent integration with the Google services. And SkyDrive is best for working with Microsoft Office products and offers the lowest pricing plan. Ultimately, if you're still at a loss as to which cloud service to choose, all three are free to try out and there's always a way to combine them all.

Which cloud storage service do you prefer?
View results

Use this link to register, you can get +5GB space.

I used Dropbox and found there was not enough free space for me, then I used Sugarsync, it's the same as Dropbox, but slower.
Now I am using new service - Copy. They will give you 15GB for free.
If you register on Copy and install their application to backup / sync your data, you will get 20GB for free!
Bonus for you is, that if you will find some referral, you will get next 5GB for free per each! Like this, you can get unlimited space for free!

It's easy to maintain my business data

There is new Dropbox-like service called Copy, provides the same features and much more space - 15GB + 5GB for sign-up by invitations. https://copy.com/?r=klzP2t

Copy Referral Program. (Copy Referral Program — In possibly the most rewarding referral program in cloud storage history, Copy users can earn 5GB of additional free storage for both themselves and the person they introduce to Copy for each referral, with no limit on the total capacity they can earn. The average Copy referrer has earned well over 60GB of free storage, with the largest referrers earning space in the 10s of TBs). Follow this link to get started with 20 GB. https://copy.com?r=itVLNk

I would use both SkyDrive and the very famous Google Drive, both are my cup of tea

Might I suggest BackupThat.com Free Unlimited Cloud Storage. Not just free for a while. It's free forever!

I use Dropbox and GDrive in roughly equal measures, for different purposes. If I want to share something on the Internet, I use the Public folder in Dropbox (because it allows direct linking to files). If I want to store something online, I use GDrive (because it has more free space). They do coexist quite peacefully, and I'm spared the agony of choice.

I prefer Google Drive exactly because I'm stick to many Google projects and just want to stay in the same ecosystem.

It does look like a neat little thing. But to entrust all your accounts (especially the Google one, which may include your Google Wallet) to just one service doesn't quite scream safety to me.