A Preview for Skype's Real-time Translator Is Now Available 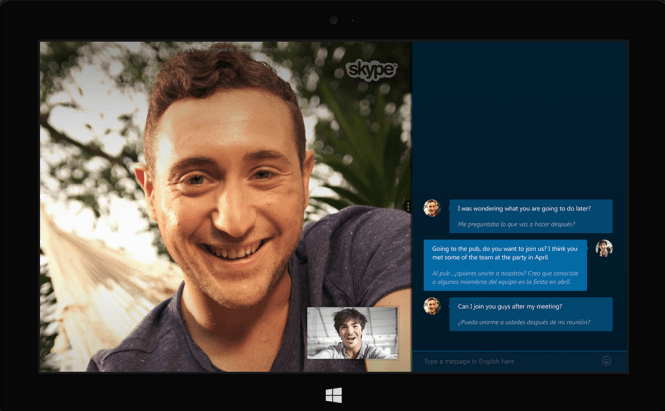 A Preview for Skype's Real-time Translator Is Now Available

Language barriers will soon no longer be a communication problem. Actually for a few languages it already isn't. Microsoft has just launched a beta version of its Skype Translator that can be tried out by anyone interested. The only catch is that you have to use either Windows 8.1 or the preview build of Windows 10 in order for it to work. At the moment, the beta version is only capable of real-time voice translation between just four languages: English, Spanish, Italian and Mandarin, but this number will surely grow in time. When it comes to written messengers, the app can translate the text between 50 languages including Klingon (for all geeky Star Trek fans out there).

According to Microsoft, this new tool works with almost any Skype client so the other person isn't required to have the translator enabled in order for it to work on your end. However, there are few small disadvantages that you have to be mindful of. For starters connecting to a call while your translator is engaged will take longer than normal, so you will have to be patient. Furthermore, this function requires a fast and reliable Internet connection, so the company suggests using a wired connection instead of a wireless one. Another small issue is that, if you use it for voice communications, the tool doesn't automatically detect the language, so you have to set it up manually. Last but not least, Microsoft also suggests using headphones with mic set, rather than just a standalone microphone as it will improve the quality of your conversation.

To try Skype Translator for yourself, click on this link which will take you to the app's page on the Windows Store. In case you're having difficulties, here's a complete list of tricks that will help you improve your experience with the application.