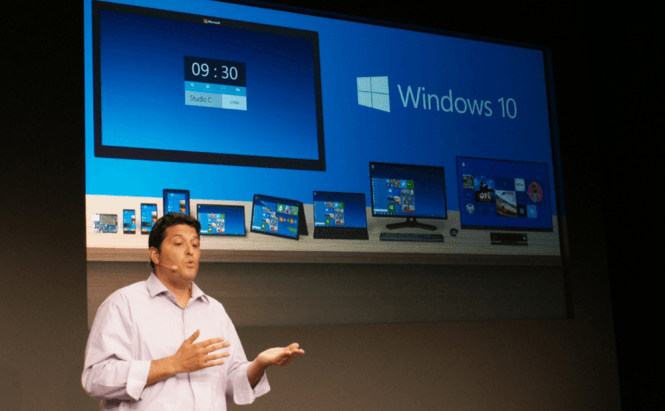 Yesterday, Microsoft held a press conference where the company revealed its lateest creation: Windows 10. After months of unconfirmed rumors, leaked photos and wild guesses, we finally have some exact information and, as I think, the new Windows looks pretty good.
Let's start by addressing the elephant in the room: the name. In all my previous news feeds I've been calling the upcoming Windows version either 9 or Threshold and both names proved to be wrong since Microsoft decided to add a bit of shock value to the title and baptised the operating system Windows 10. The explanation may be that the difference between 8.1 and this release is so big that they felt the need to skip 9 altogether.In terms of features, some of the most important functions that we have already talked about are now confirmed: the Metro UI is gone for good, so our PCs will no longer look like overgrown iPads and we have a new and improved Start Button. What's really cool is that the start button will now offer a mixture of the traditional start menu and live apps which display real time updates in their icons. Another thing I like is the focus toward business and productivity which the new Windows version is showing. Let's be honest, Windows 8 lost a lot of business customers for Microsoft and they are now working to fix that. First of all, there's a feature called Continuum which will allow users of those increasingly popular 2-in-1 devices to easily switch between laptop and tablet mode. Secondly, the Snap app will help you divide your display into four working areas, so that you can conveniently work with multiple programs simultaneously. Furthermore, it seems that the apps and App Store will become universal, but we still don't know exactly how that is going to work. And the last but not the least, the rumored virtual desktops feature has been officially confirmed, so this long awaited functionality will finally be available to all Windows users. Windows 10 will work on PC, laptop, tablet and smartphone, but we don't know exactly how or what hardware configuration you need in order to run it. The final version of the product will be launched sometime in 2015 (according to Microsoft), but rumors still say that it's going to happen in spring. However, if you just can't wait to test the operating system, in a couple of days, a technical preview will be available for all those who sign up for the Windows Insider Program. There is still a number things left to clarify such as Cortana integration or the desktop overhaul, but I hope we will learn all the details pretty soon. Microsoft refused to answer all price related questions so we will probably find out more on that subject when by the time of the official release.

I am really impressed with the new features of Windows 10, that merely no other versions of Windows have offered us.
But I have a query: will windows 10 automatically update BlueJ and its virtual machine to its latest version?

Looking forward towards Windows 10 release, hopefully they will fix all of the Win8 problems and usability.

Really, I wait for the launching of new Windows 10 features.

I am waiting for Windows 10.