Check out the world's first gaming laptop with water cooling 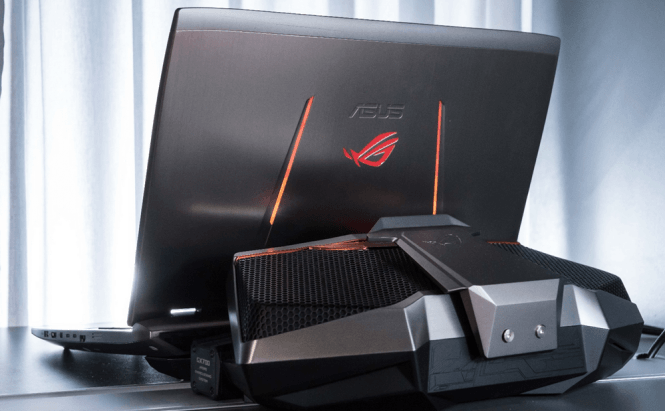 Check out the world's first gaming laptop with water cooling

Up until now, the term of "gaming laptop" was a complete nonsense to me. As far as I was concerned, if you wanted to play serious games like GTA V, Witcher 3, Star Wars Battlefront, etc., you used a "real man's" desktop PC with a big screen and a bunch of coolers to compensate for the high amount of resources demanded. Asus may have just changed my mind on this issue when it unveiled its mind-boggling, world's first laptop with a water cooling system: the GX700. I admit, the water cooling device has two main drawbacks: it's ugly (from my perspective) and it's not that portable, but it's actually a dock, so you can connect and disconnect it from the laptop whenever you want to.

Let me try to explain how this all works: the water cooling system is actually a dock which can be connected through a series of ports to the back of the laptop (as you can see in the gallery at the end of this story). It contains all the water cooling components such as a pump, a reservoir, two 90 mm radiators and vents. All you have to do is slide the laptop into the right pegs, then push it down and the two devices will instantly start working together with water flowing through the laptop. In case you were worried, Asus stated that the seals are locked tight so there aren't any drips when you disconnect the doc from the PC and, even if there are some, the water will quickly disappear without affecting the device. The one big disadvantage is that when the water level of the reservoir gets too low (the laptop notifies you), you have to send it back to the company to refill it.

Since it's designed to work just fine, even when disconnected from the water-cooling dock, the GX700 needs a hybrid system, so it features a separated heat pipe system which sucks as much heat as possible from the CPU and GPU. Additionally, the laptop comes with a quad-core Skylake Core i7-6820HK processor, up to 64GB of DDR 4, an Nvidia GeForce GTX 980 graphics card and a G-sync panel. I'm guessing that the laptop will become available before Christmas this year, but I have no idea how much such a technological wonder will cost. (I'm pretty sure it won't come cheap.)